You hear about it everyday all your life, ever since your were born when mothers and fathers say, “Goo goo. Hi there. I love you and kiss and hug you over and over again.”

And all through childhood and in movies and in music and in advertisements. The message is everywhere. Love, love, love. Even the Beatles sang a song called “All You Need is Love.”

But what does love mean?

I guess it means different things to different people.

I remember a lady I was once with saying she didn’t know what love was.

I was shocked. I mean I was with her for quite a while and I guess I should have known what she said was true but I overlooked it and when I tried to explain my definition of love to her as: “It’s when you care about somebody very, very much and want to be with them and please them and do things for them and take care of them and stay together.”

She just looked at me and shook her head and said, “If that’s love, I guess I’ve never felt it.”

Naturally this came as quite a shock to me because we’d been together for a long time and she told me many times how much she loved me and how happy she was that we were together.

I guess I just thought the concept of love was something universal that everybody agreed upon. But evidently it’s not. I mean we should all agree on something, shouldn’t we? Why not love?

But looking back at that relationship, I do see that she was right, she didn’t know what love was. The only time she wanted to do anything I wanted to do or please me was when it pleased her. Otherwise, it was “No.”

Naturally this lead to fights. A lot of fighting. Fights that sometimes went on for hours and for days. I’m sure the neighbors heard us fighting all the time because that’s what we were good at. That and makeup sex. We were good at that too. At least until one day when she said, “I’m not as interested in sex as I used to be.”

All I could think was, “Well, what else do we have together?” I mean it was the one thing we had that we were good at together.

This from the lady who used to say, “Doesn’t the air make you want to have sex? Doesn’t the water turn you on? Doesn’t the sun, the wind, the music turn you on?” Naturally I would nod my head and we’d go at it whether I felt like it at the time or not, all I had to hear was that she wanted something and I would do it for her.

Naturally we eventually broke up. And it was a difficult break up because neither one of us really wanted to break up but we did break up and it took a long time but, of course, hearing what she said about me from her friends, was, ”Phil was the problem. It was all his fault and he was the love of my life.”

So, I guess some people don’t know what love is. They must think it means that they want to sleep with someone as in the song, “Lay down. I think I love you.” Or that love means controlling someone else or someone being their possession.

And yet, the concept of love is probably more talked about than just about anything else ever has been. That and sex, and I guess to many people, there’s not much difference, which might explain the reason why so many people cheat on each other and lie to each other and why the divorce rate is so high.

I guess after a couple of years or so of making love with each other, they’ve had enough and it’s time to go on to someone or something else. And do it all over again.

Of course there’s always money and power and obviously a lot of people can’t get enough of that, so that might be love for them.

So, that’s my definition of love. I guess there are also different kinds of love like the love people usually have for their children and their parents and their friends and relative and other things in life but loving someone else who you believe is special and wanting to give to that someone else, that’s very special and it’s something I think that we all want to have and want to give.

That’s what I believe and I’m sticking to it. 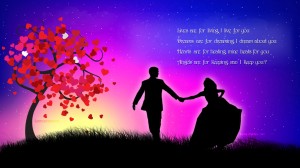