For those who do fly out of Chico, or at least consider it along with flights from other airports, reliability can be a key factor.

How reliable are the flights from Chico?

Subjectively, it probably depends on what your personal experiences have been.  If you’ve flown from and to Chico, and have had generally positive experiences, then it’s likely you feel good about it.  For example, the last time I flew out of Chico was in June 2012, connecting in San Francisco both ways with nonstops to and from Newark, N.J..  Everything worked flawlessly even though the connecting time in SFO on the return was brief.  A month prior to that, a trip to Austin, Tex. also went smoothly.

On the other hand my partner returned from Tampa in March, and due to a mechanical delay in Houston, what would have been generous connecting time in San Francisco evaporated and he missed the on-time departure of the flight to Chico.  He had to wait five hours for the next Chico flight.

For me, the ease and convenience of flying from and to Chico trump the possibility of delayed flights in most instances.  But for others – business travelers in particular – it can be a deal breaker that leads them to use Sacramento exclusively.  Looking at the comments the first post in this series has already received, the reliability question is critical, and I dare say that this chapter will generate further comments along the same lines.

When I talk with Chicoans about their flying habits the reliability issue comes up repeatedly.  While I think some people merely repeat what they hear from other people (when asked if they have ever flown out of Chico, often the answer is “no”), there are those who really do want to use Chico, but have been burned in the past.  They’ve had forced overnights in San Francisco, or ended up renting a car in order to get home.

The reliability issue is more than just the usual stuff of weather/single-runway operations at SFO, mechanical delays, flow control (ATC delaying departures in the origin city to prevent congestion at the destination city), and flight cancellations; it is also inextricably linked to the lack of frequency of flights between San Francisco and Chico.

Using the example of my partner’s missed connection, it was the late arrival of the Houston-San Francisco flight that caused him to miss the on-time flight to Chico.  However with only three flights per day, he had missed the second flight of the day, and then had to wait five hours until the third and last flight.  (By the way if you miss a flight and are stuck with a long layover, ask for a meal voucher at a United customer service desk.  No guarantees, but you might get one.  He did.)

The Department of Transportation (DOT) has an amazing array of aviation statistics available on its website.  For flight delay statistics this page shows all sorts of options for searches.

Here’s one example: take a look at the Bureau of Transportation Statistics page for “Airline On-Time Statistics and Delay Causes”.  Select “SkyWest Airlines Inc. (OO)” from the drop-down list, “Chico”, and then “January 2012” and “December 2012”.  See example below for how the query should look.

What is returned is a detailed synopsis with pie chart for arriving flights to Chico.  On-time (within 15 minutes of the scheduled arrival) were 64.62% of flights.  As to the reasons, the most common were late inbound aircraft (nearly 20%), air carrier delay (mechanical, etc. – 6.38%), and canceled flights (5.9%).

If you’re wondering about an individual flight, that information is available to you when making flight reservations, thanks to DOT requirements.  Using United’s website for example, here is what you’ll see when reviewing flight choices:

Click on “See On-Time performance” and another window will appear. 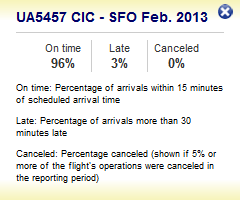 Yes, that “on-time” number is correct.  The first flight of the day from Chico (the one that leaves anywhere from 5:00 a.m. to 6:15 a.m., depending on the time of year, is exceptionally reliable.  It’s always the one I use, and it connects with the first wave of flights out of San Francisco to faraway places in the Midwest and on the east coast.  (Because the aircraft overnights in Chico, there isn’t a question of the plane being available the next day.)

Reliability is crucial to creating more passengers dedicated to flying out of Chico.

Whatever United and SkyWest can do to improve performance will be useful, whether it is establishing a longer minimum connecting time in San Francisco or setting guidelines for flight cancellations that are invoked as rarely as possible.  There are things that the City, the business community, and interested members of the public can do to promote air service in Chico, but making the existing service more reliable – much more reliable – is in the hands of United and SkyWest.

Yes, weather and other factors beyond the airlines’ control will always throw some curve balls, and flying out of Sacramento does not immunize a passenger to many of the same disruptions.  But better processes to handle trouble, and perhaps judicious use of a standby aircraft and crew in San Francisco (to protect all of the cities served by SkyWest in northern California, not just Chico) would go a long way toward restoring the reputation of the service.

Ultimately adding back frequency in the market will be the best hedge of all against unpredictability.