I’m not pretending to present an authoritative history of Chico’s air service, but rather just a couple of snapshots of old airline timetables I own.  Links embedded in the names of airlines referenced go to Wikipedia articles.

Any readers who have kept old Chico timetables or OAGs (Official Airline Guides) should please comment back with additional information or anecdotes.  (The City of Chico does not keep an archive of old timetables.) 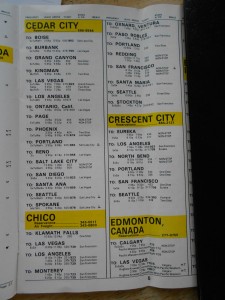 This Hughes Airwest timetable from 1973 listed three daily flights to San Francisco and two to Redding.  One of the Redding flights was a milk run that continued to Klamath Falls, Portland, and Seattle. 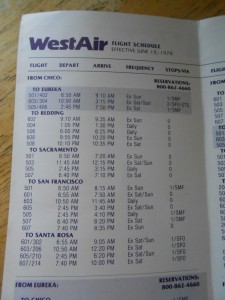 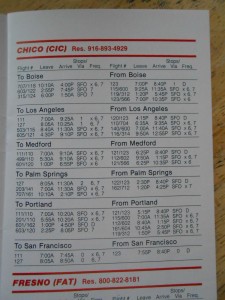 Pacific Express was noteworthy not only because it flew jets (BAC 111) but also in that it was actually based in Chico, though Chico flights were an insignificant part of its network.  In this timetable one daily round-trip operates to San Francisco.  (The southbound flight continued to LAX.)  Pacific Express operated between 1982 and 1984.

I moved to Chico in September 1998, and between that time and late 2000 I traveled to and from Washington, DC, frequently.  At that time (and for how long before I do not know) SkyWest/United Express was the sole carrier to Chico, and exclusively to and from United’s San Francisco hub.  During the 1998-2000 period in which flew I frequently, United Express operated six flights each direction.  In the autumn of 2012, service was reduced from four to three flights where it stands now (April 2013).

Here’s a YouTube clip brought to my attention by Debbie Collins, Management Analyst at the City of Chico.  It’s an 11 minute audio clip about the airport, focusing on its commercial aviation history and then on its years as an Army Air Corps training base, and its postwar history as a location for an ICBM silo.  (Thanks, Debbie!)