Progress Toward an LA Suburb

I grew up in LA, land of too much traffic and noise, tons of smog, a lot of crime, gangs fighting over territory and too many people wishing they’d get out of each other’s way. Some people say that’s the price of  ”progress.”

I moved to Ventura in 1972, which at the time had a lot of open space and beautiful blue skies and lots of orchards and peace and quiet and strawberry fields everywhere. In the three years I lived there, orchards were being cut down, much of the open space and strawberry fields were being filled in by housing developments and factories and noise and the blue skies were turning grey and the peace and quiet was being replaced by too much traffic, noise and people wishing they’d get out of each other’s way, crime and gangs. More progress I guess.

So in 1975 I moved 500 miles from LA up to Chico, which at the time had a lot of open space and beautiful blue skies and lots of orchards and peace and quiet and no gangs but that gradually changed in the 27 years I lived there. Orchards were being cut down and the blue skies were turning brown due to all the burning, the noise was getting loud, crime was increasing and the gangs began to fight for territory so in 2002 I moved up to Forest Ranch which is nice and quiet and has lots of open space without too much traffic or too many people and no gangs.

Yes, I miss being able to go out my door and do things like ride my bike through Bidwell Park or just run to the store or to the bank or to a nearby restaurant but I can walk out my door and take a nice long walk through the peace and quiet woods without being assaulted by noise, traffic, crime or gangs.

But now it’s 2013 and I see while driving up Highway 32 from Chico to Forest Ranch (up from Bruce Road and Forest Ave), oak trees are being cut down and there’s a huge development going in what is only the start of 1300 housing units being built and with that will come a whole lot more traffic and road rage on Chico streets which already has too much traffic for the infrastructure to safely handle.

How can they make more streets in Chico for the increase in traffic? Well, I guess we can’t worry about that, huh? Oh, that’s right, the developers of the 1300 housing units and factories are going to widen a little bit of highway 32 a few feet. Let’s see if that really happens — and even if that does happen, how is that going to help the traffic congestion all over the rest of  Chico? Oh, that’s right, it won’t. But, hey, we can’t worry about that. There’s money to be made!

Yes, it’s good for the economy and there are temporary jobs and people will have homes to buy and live in but soon there will be much more traffic and more smog and more crime and more gangs in what will make Chico more like LA suburb.

There’s got to be a better way to do things rather than just closing our eyes and not caring about how we are not planning for our future and calling it progess.  Is it not possible to have progress that does not make our problems worse?

I guess if there was money to be made in doing that it would be happening but in the meantime, I guess people will just keep closing their eyes, hope for the best, accept the increase in traffic and accidents and noise and crime and gangs and smog and call it progress — and people like me will just have to keep moving away. 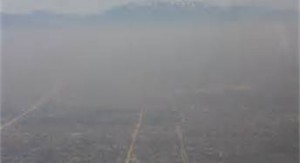 LA smog. A lot of the time, while driving down Highway 32 from Forest Ranch, Chico already looks a lot like this.