In this second installment on Alameda, I’m going to introduce you to the western half of the island. If you didn’t read Part 1 about Alameda, click here for a shortcut to that post.)

The western end of Alameda is dominated by the large property that was formerly the Alameda Naval Air Station (NAS). The land that became the Navy base was tideland that was dredged and filled in the late 1930s. Even before the attack on Pearl Harbor, the Alameda NAS was a substantial facility. Rather than paraphrase its history, here’s a link to the Alameda Naval Air Museum website. You’ll find lots of fascinating history and photos.

As with many military installations in the 1990s, the Alameda NAS was decommissioned. That took place in 1997. When I lived in Oakland and worked in San Francisco (1990-1998) I would occasionally take the ferry from Oakland’s Jack London Square to San Francisco instead of riding BART. Because it involved a little bit of extra effort and more driving, the ferry was a treat typically indulged on Fridays when the weather was nice. I remember on at least one occasion seeing (or especially hearing) Navy jets take off from the base. Boy, were they loud!

Work also brought me once to the base in the early 90s when it was still a going concern. I worked for Amtrak training travel agents and the Alameda NAS, like many large military bases then, had what was called a SATO. SATO stood for Scheduled Airlines Ticket Office and functioned for military personnel as an on-site travel agency for both official and leisure travel. SATO agents typically were airline employees although they booked travel on all airlines and Amtrak. Anyway I spent a morning working with the agents there. As a matter of fact, I did the same thing at the SATO office on Treasure Island during the same period.

Although my connection with the Alameda NAS was minimal, I found the appearance of the base rather melancholy eleven years after its decommissioning. For men and women that worked on the base for years I’m sure the appearance brings back a lot of memories as well as sadness at its closure. Here are photos taken on 15 October 2008.

ENTRANCE TO THE BASE ON THE ESTUARY (NORTH) SIDE 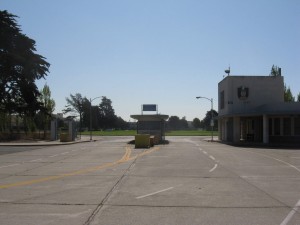 GUARD HOUSE AT THE ENTRANCE 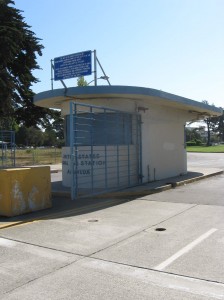 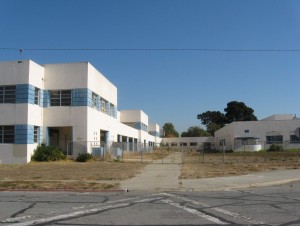 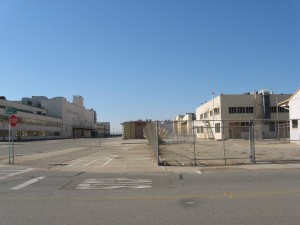 LOOKING WEST TOWARD SAN FRANCISCO OVER THE WEEDY, UNUSED RUNWAYS – 1 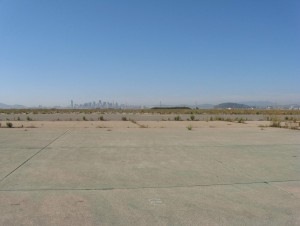 LOOKING WEST TOWARD SAN FRANCISCO OVER THE WEEDY, UNUSED RUNWAYS – 2 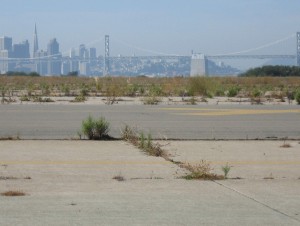 NEAR THE MAIN (EAST) ENTRANCE TO THE ALAMEDA NAS 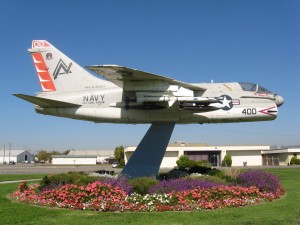 If you have the slightest interest in naval history or just want to experience a Really Big Ship, the USS Hornet, a retired aircraft carrier, is moored here and open to the public between the hours of 10 a.m. to 4:00 p.m. The Hornet was an active aircraft carrier from late 1943 through the Vietnam era. It’s been a floating museum since 1998. 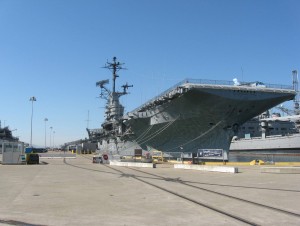 WELCOME TO THE USS HORNET 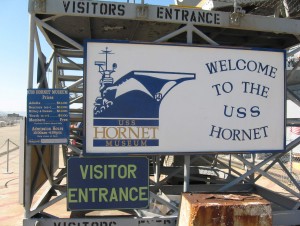 THREE “NEIGHBORS” OF THE HORNET 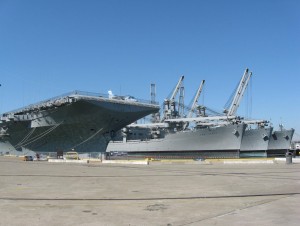 Lest you think that time has simply stood still at the old Naval Air Station property while it slowly molders away, in fact there is plenty going on.

The area is now called Alameda Point and is owned by the City of Alameda.

Typical of reuse projects on formerly industrial and/or military properties, a huge amount of environmental remediation will be necessary. The transition process is expected to last for many years. A good deal of housing has already been built on formerly NAS land and some businesses have located there. Let’s take a look at one which might interest many folks.

Do you like vodka or other spirits? If so, then there’s a chance you’ve enjoyed a product made on the old NAS premises and appropriately named “Hangar One”.

Hangar One vodka and its sister company, St. George Spirits, keep each other company in an enormous aircraft hangar on the westernmost edge of the old NAS. In fact, the pictures you saw earlier in this post of the weedy runways looking in the direction of San Francisco were taken through the chainlink fence at the edge of the parking lot by Hangar One. By the way, the answer to the question I know you’re asking is “yes”. Yes, they offer tastings of vodka and other spirits. From jetfuel to vodka – now that’s constructive reuse in my book! 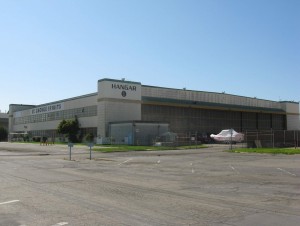 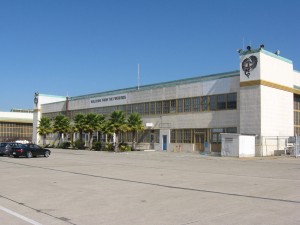 Notice the sign atop the building that reads “Welcome From the Firebirds”, a Navy squadron perhaps?

SEE THE PORT OF OAKLAND IN THE BACKGROUND? (across the estuary) 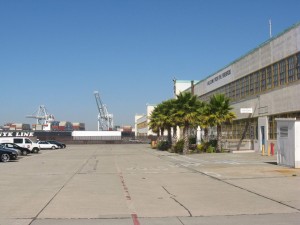 Below you’ll see a building across the street from the distillery that clearly has been reconditioned and is now being used although the business name is not posted outside. Earler in this post you saw a picture of a similar building next door that is quite decrepit. I find this this utilitarian 1940s/1950s style attractive. Kind of a stripped down Streamline Moderne or maybe in this case Military Moderne. If any students of architecture out there are reading this please comment back to inform us what this style is correctly known as. 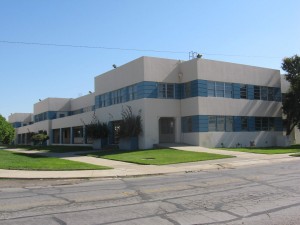 You’ve now seen a slice of the old Alameda Naval Air Station. If you looked at the maps then you’ll know that it’s a vast parcel indeed. You can explore to your heart’s content except on the old runways. As far as I know, there no longer is any military presence so you won’t have restrictions on your movements. I think you’ll find it an illuminating look into what was once an enormous naval military facility in the heart of the Bay Area. 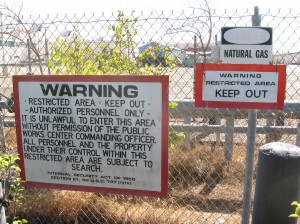 For wine lovers here’s another excellent destination in the west end of Alameda. If you like Zinfandel then you’ve probably heard of Rosenblum Cellars. Rosenblum is noteworthy on numerous levels. For one, it mostly does not grow its own grapes, instead buying from a network of vineyards throughout California. Secondly, its location is completely unlike anything you would expect. It’s housed in an old warehouse right next to the estuary and across from the Port of Oakland. It is also very close to the north entrance to the NAS and perhaps one mile in staggering distance from Hangar One. (Walk or have a designated driver!)

They have a cool tasting room on a mezzanine above a working area of the winery. Nice staff, great wines and one of the most unusual settings for a winery. Rosenblum Cellars also has a tasting room just off of of the plaza in Healdsburg but for my money I’ll take Alameda. It’s where the wine is made and the gritty 1930s warehouse feel is an unusual counterpoint.

ROSENBLUM CELLARS (Port of Oakland structures in the background) 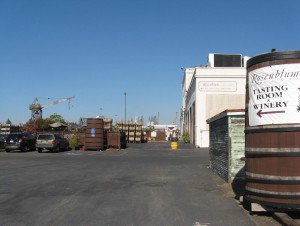 LOOKING WEST ALONG THE ESTUARY TOWARD SAN FRANCISCO 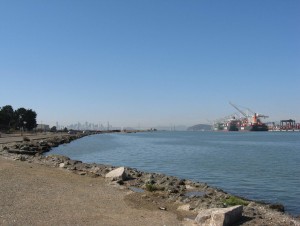 North entrance to NAS in the left distance, Port of Oakland to the right. The ferry to San Francisco and Rosenblum Cellars are a short distance behind where the picture was taken

One last (non-alcoholic) drinking point. If you like Peet’s Coffee then you may care to know that it’s roasted in Alameda. Peet’s moved its roastery from Emeryville to Alameda in 2007. It’s not actually on the island of Alameda, however. Alameda’s city limits include a piece of the “mainland” just north of the Oakland airport. The roastery is in a business park called Harbor Bay Business Park.

I’ll wrap things up with a couple of other points to keep in mind if you decide to visit the island city.

If you’re in San Francisco and are looking for a fun, non-automobile outing take the Alameda-Oakland Ferry from the Ferry Building at the foot of Market Street in San Francisco. You could even just go for a quick trip to Rosenblum Cellars because the Alameda ferry terminal is right next door to the winery! And if you’re in halfway decent shape you could walk from the ferry terminal to Hangar One/St. George Spirits at the old NAS. It’s probably about a mile away and completely flat.

If you have time to explore more of the island beyond its boozy pleasures, the ferry tickets come with a free round-trip transfer to AC Transit (the East Bay’s bus system) which will take you all over Alameda. Adult ferry tickets are $12.50 round-trip; discounts for seniors and children.

The ferry is a terrific ride especially in nice weather. It goes under the Bay Bridge, by Yerba Buena Island, and offers a close-up view of the Port of Oakland. Plus as you head to Alameda and San Francisco recedes you’ll appreciate the sight of San Francisco in a whole new way.

The choices in Alameda itself are limited. There are two B&Bs according to WhitePages.com. There aren’t any noteworthy hotels I can tell you about. There is a reasonably priced motel (Coral Reef) I’ve stayed in that I believe was once an apartment building because the rooms have kitchens. It’s across from the South Shore Mall and close to the beach but a long walk (or short drive) from the Park Street commercial area. You can check the Alameda Chamber of Commerce website for other lodging ideas. Nearby Oakland offers more choices.

That concludes this look at Alameda. If you do visit, please comment back with your own experiences and discoveries.

This entry was posted in Destinations and tagged Alameda, Alameda Naval Air Station. Bookmark the permalink.