What If Jesus Were On a Park Bench?

In a small college town 20 miles north of Charlotte, N.C., a sculpture of “Homeless Jesus” is provoking more conversation than a month of Sunday sermons. Canadian sculptor Timothy Schmalz notes the ironies in his latest creation, “Jesus the Homeless,” a bronze sculpture depicting the Christian savior huddled beneath a blanket on an actual-size park bench. Only the feet are visible, and their gaping nail wounds reveal the subject. 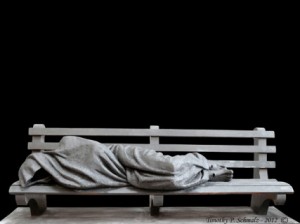 The sculpture is just outside St. Alban’s Episcopal Church installed on its property in the middle of an upscale neighborhood filled with well-kept townhomes. The bronze statue was purchased for $22,000 as a memorial for a parishioner, Kate McIntyre, who had loved public art.

“One woman from the neighborhood actually called police the first time she drove by,” says David Boraks, editor of DavidsonNews.net. “She thought it was an actual homeless person.” That’s right. Somebody called the cops on Jesus. “Another neighbor, who lives a couple of doors down from the church, wrote us a letter to the editor saying it creeps him out,” Boraks added. Some neighbors felt it was an insulting depiction of the Son of God, and what appears to be a hobo curled up on a bench demeans the neighborhood.

Whatever you think about this depiction it has inspired a fair amount of debate. Rev. David Buck, a 65-year-old Baptist-turned-Episcopalian who seems not at all averse to the controversy, the double-takes and the discussion the statue has provoked. “It gives authenticity to our church,” he says. “This is a relatively affluent church, to be honest, and we need to be reminded ourselves that our faith expresses itself in active concern for the marginalized of society.”

The sculpture is intended as a visual translation of the passage in the Book of Matthew, in which Jesus tells his disciples, “as you did it to one of the least of my brothers, you did it to me.” Moreover, Buck says, it’s a good Bible lesson for those used to seeing Jesus depicted in traditional religious art as the Christ of glory, enthroned in finery.

“We believe that that’s the kind of life Jesus had,” Buck says. “He was, in essence, a homeless person.” NPR

Compassion and empathy are the hallmarks of a civilized society – we at Post Scripts get it, even though we’ve posted many articles critical of transients overwhelming Chico’s charity and welfare services. (This issue also involved transients chasing away customers from the downtown businesses. Some of those places have ceased doing business as a result.) However, far more of our articles have been about the reasons transients come here and the solutions for managing this growing problem.

We feel every community with a homeless problem should have public and private services available to address mental and physical health issues and rehabilitation. This is reasonable, but the services offered must be properly balanced between the actual “local needs” and affordability. These services do not come cheap and the money to provide for them is not infinite; in fact it’s very limited, so we need to use it wisely where it will do the most good. That can be a challenge and something each community needs to sort out for themselves. Chico is going through this process right now.

One community should NOT be expected to provide more services than another simply because they are receiving more transients and that’s where Chico is at the moment. There are hard limits as to what should be expected of us as a community. And it is the obligation of our city council to establish a fair balance between costs and services provided or we risk serious economic consequences. Then we wind up carrying more than their fair share…as we have been doing for several years now. No doubt this has taken a load off other communities, but at our expense and that’s not right and it’s not smart of us to allow that to happen.

Chico has three very active shelters, and if we had six more we could fill them. If we had 10 more we could fill them too! But, we can’t afford 10 more and some would argue we can’t afford the 3 we have because they are acting like magnets, attracting too many transients to come here. This is a reality that some of our well meaning community leaders fail to accept. The first rule of giving is, the demand will grow exponentially to the giving. Compassionate balance means, we provide shelter and services, but in proportion to our truly needy indigenous homeless and our financial ability.

To do this right a community must prioritize the funding of resources against a triage of needs. First on our priority list should be those that suffer from debilitating mental illness and severe physical limitation. Next, focus on those with self-imposed issues, like alcoholism and drug addiction. The last category should be re-entry assistance for people who have made less than stellar life-choices that have brought them to this low point.

We are under no obligation, nor should we be, to provide assistance to people who come here because they heard Chico has a generous population with abundant services they can use to promote their lifestyle and/or bad habits.

The Bible is all about compassion for the lowest among us, but the Bible also has much to say about who ought to receive our charity and who should not. 1 Thessalonians 4:11-12 And to aspire to live quietly, and to mind your own affairs, and to work with your hands, as we instructed you, so that you may walk properly before outsiders and be dependent on no one. Proverbs 12:11 Whoever works his land will have plenty of bread, but he who follows worthless pursuits lacks sense. The Bible goes so far as to say, “He who does not work, neither shall he eat” This a Biblical aphorism derived from II Thessalonians 3:10. Hunger is a great motivator: Proverbs 16:26 A worker’s appetite works for him; his mouth urges him on.

The Bible makes it quite clear able bodied people are expected to work for their keep and lazy people reap what they sow. The Bible taught responsibility right along with compassion. So, by all means give to charities and/or work as volunteer on behalf of the homeless. That kind of support is needed and it’s worthy – but, direct giving of money to the homeless is counter-productive and unwise.

At Post Scripts we have railed against those who freely hand their spare change to street bums and beggars, not because we lack empathy or caring, but for the reasons just stated. The people who are giving to them are hurting them! Givers are like codependents to the homeless and they keep them down. They are only helping them avoid confronting their drug or alcohol issues or some other serious issue. This allows them to stay on the street and away from shelters where they will be counseled. And lets face it, not all homeless want to be counseling or to be re-directed to a job. They would rather hang out with their cardboard sign, looking for spare change from the well meaning, but foolish and the problem grows.

Well, that’s about it. I hope you have a little better understanding of our position when we talk about tough love or not giving directly to homeless. So, if we spotted Jesus on a park bench, I suppose we would lead him to the nearest homeless shelter where he could talk to those in greatest need of his advice and healing.

This entry was posted in Uncategorized and tagged christian, Jesus on a park bench, lesson, sculture. Bookmark the permalink.

4 Responses to What If Jesus Were On a Park Bench?