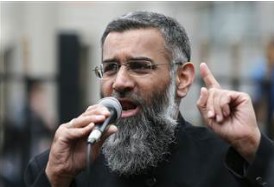 LONDON — One of Britain’s most notorious radical preachers has been charged with generating support for ISIS, police said Wednesday.

Anjem Choudary, 48, was initially arrested and bailed in September 2014 on suspicion of membership in ISIS.

Scotland Yard said Wednesday Choudary had been charged and brought into custody under Britain’s Terrorism Act.

Choudary allegedly “invited support for a proscribed terrorist organization … known as ISIS,” the force said in a statement. A second man, Mohammed Rahman, is facing the same charge. “Proscribed” means banned in the U.K.

Britain’s Crown Prosecution Service said that the charges related to the period between June 29, 2014 and March 6 of this year.

It is alleged that Anjem Choudary and Mohammed Rahman invited support for ISIS in individual lectures which were subsequently published online,” it said in a statement.

The two men were due to appear in a London court later Wednesday.

Choudary, a known Islamist firebrand, has been accused in the past of spreading hate. He recently was in the headlines for blaming the U.S. for radicalizing “Jihadi John,” the masked executioner seen in propaganda videos of ISIS beheadings.