Hillary Clinton will be Indicted!

Hillary will be indicted, or Obama will for obstruction of justice. Of course Obama has a legacy to protect, (whoosh sound) and there goes Hillary under the Obama bus. 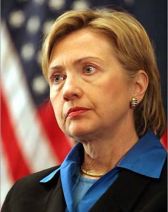 Yes, boys and girls, I am saying right here, right now, that before too long Mrs. C is going to be in whole lot of hot water with the Justice Dept. The Obama Administration really doesn’t have much of choice, the case is too clear cut. They will be forced to hand down an indictment against Hillary or you will see mass resignations at the FBI. What are the charges? Reckless mishandling of classified documents, a misdemeanor, similar to what was brought against Gen. David Petraeus, who pleaded guilty this week for keeping classified documents in an unsecured location. The next charge is much more serious, a conspiracy to “conceal documents from government computers,” which carries a penalty of three years in jail per document. A conviction on that charge would disqualify her from holding public office again. Then there is perjury, but chances are it will all be handled with a plea deal and then she’s gone from politics forever.

According the Wall Street Journal, “Mrs. Clinton’s tenure as secretary of state was supposed to be an asset in the presidential race. On the contrary, her use of a private email system on which classified information was transmitted is under FBI investigation. And the State Department has been forced to release a monthly stream of her emails. On CNN’s “State of the Union” on Sunday, she was asked if she has been interviewed yet by FBI agents. Her terse answer: “No.” That may change. On Tuesday Fox News published a Jan. 14 letter from the inspector general of the intelligence community to senior lawmakers stating that a review by intelligence agencies found “several dozen emails” containing “classified” and “top secret” information in Mrs. Clinton’s unsecured server.

The new movie “13 Hours” is another detriment. The film depicts the hours in Benghazi, Libya, in 2012 when American Ambassador Chris Stevens, a foreign-service officer, and two CIA contract employees were killed by terrorists. Mrs. Clinton is not mentioned by name. It is clear, however, that security for Mr. Stevens was woefully inadequate (despite his many requests for more guards) and that no help was dispatched when he and the American consulate were under attack.”

This entry was posted in Uncategorized and tagged emails, hillary clinton. Bookmark the permalink.

18 Responses to Hillary Clinton will be Indicted!