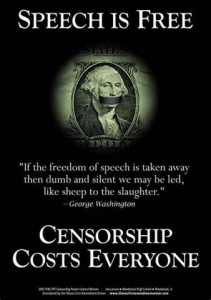 On Friday morning I noticed that Twitter stock has tanked a bit. It seemed odd since Twitter is such a popular tool for expression. Twitter’s user base is still healthy at 305 million users but it’s lagging behind compared to it’s closest competitor, Instagram. Why does it matter to us? it doesn’t except that a story in US News, posted at Yahoo also caught my eye. It features conservative Twitter users who believe they have been targeted and censored by Twitter because of their political leanings:

Twitter, an invaluable news aggregator when properly run and used, has seemingly taken aim at conservatives and those advocating conservative causes.

Rumours that Twitter has begun ‘shadowbanning’ politically inconvenient users have been confirmed by a source inside the company, who spoke exclusively to Breitbart Tech. His claim was corroborated by a senior editor at a major publisher.

According to the source, Twitter maintains a ‘whitelist’ of favoured Twitter accounts and a ‘blacklist’ of unfavoured accounts. Accounts on the whitelist are prioritised in search results, even if they’re not the most popular among users. Meanwhile, accounts on the blacklist have their posts hidden from both search results and other users’ timelines.

Our source was backed up by a senior editor at a major digital publisher, who told Breitbart that Twitter told him it deliberately whitelists and blacklists users. He added that he was afraid of the site’s power, noting that his tweets could disappear from users’ timelines if he got on the wrong side of the company. (continues)

I urge you to read the entire article. Read more on this here.

Twitter is probably losing users for a variety of reasons. But some of those losses may be due to conservatives who’ve decided a company that practices censorship isn’t deserving of support. On a similar front…

CNN’s Money program reported in early February about similar complaints with Faceboo and how they inspired some curious users to form the website, Online Censorship. The site “… reports from users in an effort to shine a light on what content is taken down, why companies make certain decisions about content, and how content takedowns are affecting communities of users around the world.” (Warning the link contains X-rated materiel)

Some of this censorship is associated with political correctness. But it goes beyond that. There’s something rotten going on in the progressive community. In America it seems to have begun on college campuses a few years ago when conservative speakers were dis-invited to speak or if they did speak were treated rudely. This trend moved into new territory when the IRS targeted conservative groups during an election year to prevent their participation. The silencing of voices is an egregious affront to freedom and speech rights. We expect it to happen in oppressive regimes but certainly not in America. Concerned Americans of all persuasions need to step up to nip this in the bud.