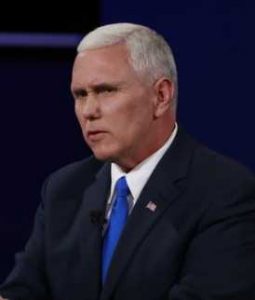 Trump’s running mate, Mike Pence, did an admirable job of trying to minimize Donald’s many idiotic statements and slip-ups made off the cuff while on the campaign trail. You had to know they would all be brought up by Hillary’s running mate (Tim Kaine) and they were. But, throughout the embarrassing list of Trumpisms, Pence was as steady and unflappable as he was informed and articulate. Oh, if only Donald Trump had one tenth the poise and knowledge of his running mate, this election would be a slam dunk!

Both candidates were pretty sharp and trying to score points for their running mate. They were well prepared, but unfortunately they frequently over-talked each other, Kaine being the worst offender, but then he is a typical angry democrat.   This part came at the expense of the moderator who struggled to keep them focused and on point. But, just getting a politician to answer the questions asked is an almost impossible task. Of course, neither candidate would give a straight answer to the questions that had no really good answer (danged if you, danged if you don’t), instead they answered what they wished had been asked! This is a common tactic that should have got both reprimanded, but didn’t.

I’m going to say Pence won the debate, but it was close. Kaine came off just a bit too snarky (surly) for most viewers and this contrasted with Pence’s nice guy approach. But, will Pence’s performance be enough to move Trump in the polls? My feeling is, probably not. Therefore, I’m hoping Julian Assange has something really good on Hillary or Bill. He says he’s going to make an important release within hours, but he’s unreliable.

This entry was posted in Uncategorized and tagged 2016, vice president debate. Bookmark the permalink.