By all measures, Trumps Middle East tour went better than expected. Trump achieved a major concession from the Saudi’s when they agreed to arrest their people for sponsoring terrorism outside their borders. Prior to this time any Saudi could fund or endorse their favorite group of killers. Trump also locked up an arms sale (mostly aircraft) with the Saudi’s which is sure bring billions back to the USA.

During the Arab leaders summit Trump scored points for calling out Iran as a sponsor of terrorism. Obama lacked the courage and vision to even go there. Then we have a historic flight from Saudi Arabia to Israel. This was first time a passenger plane was flown from Saudi Arabia to Israel and it sure was nice to see it was Air Force One. This was a very deliberate and highly strategic symbolic flight in diplomatic terms that should not be glossed over. 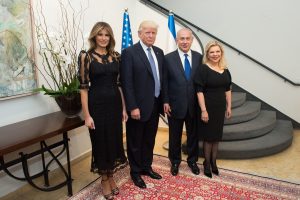 In Israel Trump was very well received again. So now, the Saudi’s were happy, the Israelis were happy, and each talked about the other in friendly terms with Trump as the mediator and go between. In fact, this seems to be a turning point. Because for the first time in modern history Middle East nations are seeing Israel more of an ally than an enemy. It remains to be seen how much Middle East peace and cooperation the US will be able to rally, especially when it comes to fighting terrorists, but the first step has been taken and it was a good one. I think most Middle East observers would say, we have every right to be cautiously optimistic.

It was patently obvious that Israeli Prime minister, Benjamin Netanyahu, was delighted and greatly relieved that Trump was in and Obama was out. Netanyahu spoke about a renewed hope for an Israeli-Palestinian peace agreement. During their meeting Netanyahu expressed his thanks to Trump for being a friend.

Next stop… Trump met with Palestinian leader, President Mahmoud Abbas. President Trump predicted a peace deal between Israel and the Palestinians could “begin a process of peace” throughout the Middle East and he committed to helping make it happen. President Abbas said a peace deal is possible and it’s time to start talking about in earnest. A very positive sign Palestine is ready to move forward.

Everywhere Trump went was a festive, celebrity moment, but behind the scenes are many dark forces that have derailed U.S. presidents who tried to broker peace agreements in the Middle East. However, there was no question that Trump’s hosts were extremely gracious, accommodating and seemed genuinely interested in improving US, Israeli and Arab cooperation, as well as working together against the extremism of ISIS and Iran.

It was refreshing to see Trump projecting US power wherever he went, unlike Obama’s dismal apology tour. It should be noted that both in Israel and in the Arab summit held in Saudi Arabia, Trump was praised for his quick response to the poison gas attacks in Syria. His guests also acknowledged that Iran’s current regime is an enemy of peace that should never possess a nuclear bomb.