Manchester is a Turning Point

There comes a time when people have had enough and their frustrations, grief and anger are galvanized into an effective force of resistance. As sad and tragic as the Manchester bombing may have been, much good is now coming forward. One very visible gesture came from Qari Asim, an Imam from a popular mosque based in Leeds (UK). He took a public stand against terrorism done in the name of his religion. In his press release he said, “The victims of the horrific attack on Manchester Arena are very much in our thoughts and prayers. This was an attack on all of us. We absolutely condemn the barbaric acts of an individual determined to spread hate and prejudice across the world. The senseless murder of innocents is utterly deplorable. With each mass murder, the terrorists deliberately seek to foster hatred and suspicion. They hope our societies restrict the very values and freedoms that define our democracy. Through their vile actions, the terrorists have yet again shown no regard for any religion or humanity.” 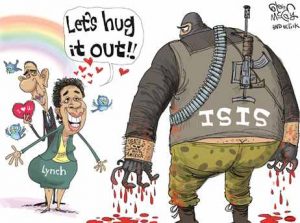 Immediately after the bombing a Manchester cabbie said what so many Brits are feeling, “We’re like glue, we stick together”. I’m sure this was not the desired effect the bomber had in mind. Terrorism seeks to divide and cause fear and panic. We’re not seeing that in the UK, we’re seeing a determined resolve to bring those responsible to justice.

Muslim religious leaders are by no means unified against those among them who use violence as a political weapon, but progress is being made. We’ve seen the fiery hate rhetoric coming from a few Muslim leaders and Muslim protestors in the past, but freedom of speech has it’s limits and the UK is fining out. Britain’s Home Secretary May said, “Incendiary comments deliberately designed to inflame fraught situations should be investigated.” Due to ongoing threats, the UK has deployed a limited number of military personnel to assist the police protecting high-risk targets. New vetting procedures for immigration are also being explored and improving their terrorist watch-list that missed the Manchester bomber.

I hope our government is keeping a close watch on events unfolding in the UK, but that task is made more difficult by our own security leaks that have caused the UK to say they won’t be sending us any more secret information until we get our CIA and NSA people under control.

If there’s a bottom line to be learned here, it is this: When it comes to a fighting terrorism, for once we ought do something smart, something proactive, something well planned, coordinated and unifying. We can’t allow ourselves to scramble around after the fact, wasting time and resources and wondering what we should have done? By then it’s too late and the terrorists have moved on to another tactic, another target, and we’re foolishly trying to fix what’s not likely to happen again.

Trump’s administration is looking into (reasonable) ways we can prevent radicals from entering the US and that’s a good start. Next, we should also have a clearly defined limit on what constitutes hate speech and poses a grave threat to our internal security. When these haters pop us we need to get on it and investigate. I absolutely believe this one is long overdue. Once we’ve identified a problem we should be able to expedite either arrests or in some cases, deportations of any non-citizens.

We have a virtual infinite number of options at our disposal to fight (efficiently and effectively) against the threat of terrorism, while not allowing ourselves to fall into the traps terrorists intend; like foolishly squandering our assets on bureaucracy or passing draconian laws that undermines our rights. Forcing us to violate our values and overreact to an incident is a key objective of terrorism! So, we better be careful. We can’t compromise our idealism and weaken our founding principles for the sake of security. Sometimes you just have to take what comes and consider it the price of freedom.

This entry was posted in Religion and tagged bombing, manchester, terrorism. Bookmark the permalink.

9 Responses to Manchester is a Turning Point