NEVER IN THE HISTORY OF THE WORLD HAVE SO FEW TAKEN ADVANTAGE OF SO MANY, THANKS TO COMPUTERS.

Here’s how to make a small fortune by doing something totally illegal and yet beyond the reach of the law! America, as many of you already know, has become the happy hunting grounds for some of the most prolific computer crooks in our brief tech history.

The reason for this surge in tech thievery is quite simple, because Americans are rich, or at least rich by 85% of the rest of the world’s standards. American’s are also not too bright with how they protect their money, plus they are trusting and gullible. Great combination for fleecing.

Now let me tell you a true story (and this is not me that was the victim!) and it’s a story that encourages thieves from every godforsaken place on earth to loot the preverbal wallets of America!
|
Phone rings. . .

Thief: Sir, my name is Roger Parker and I am with Windows. Sir, we’ve detected a virus on your computer and unless we remove it we will have no choice but to block you from using the internet.”

American: You don’t sound like no Roger Parker to me, you kinda sound like you’re from India?

Thief: Yes sir, that is true, we use American names because our Indian names are difficult for our customers to pronounce.

American: Okay, I get your point, so now what’s this about some virus on my computer? 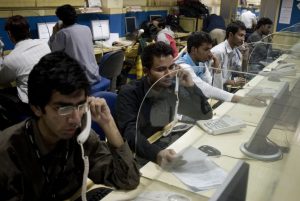 Thief: Yes sir, you have a virus and I can remove it for you at no cost, but I need your permission, would that be alright? it will only take a moment of your time and it’s very, very import to remove before any damage can be done.

American: Uh-huh…well, er, I guess so, if you are sure it won’t cost me nothin?

Thief: No sir, this service is absolutely free and provided by Windows, we’re just trying to stop the virus from spreading.

The thief is soon inside the victim’s computer as the victim watches his screen just as he is instructed to do. Many screen shots suddenly start to flash by on the victim’s monitor. Of course he has no clue what the thief is doing, only that the thief is pointing out many areas of virus infection and other security weaknesses. The thief soon establishes a fairly good rapport with the victim, and why not?  He is helping to secure his computer. Perhaps this part takes about 5-7 minutes, showing the victims things on his computer which he does not understand, because he’s is clueless about his computer just like so many Americans over 50.  And also, because the conman is speaking very fast about technical things!  But, in the end he is assuring our victim all is now in good order, much to his  relief!

Hook baited, set and now we’ve got a big fish on the line.

Next, the ultra-polite Rajneedsh aka Roger Parker, tells the grateful victim that for $100 a month he can keep his computer safe and free from viruses. If the victims replies, gee can’t I just buy an anti- virus CD for that? Rajneedsh, always with the great come back, says those programs don’t work very well and Windows is the only way to be sure his computer is safe and secure.  This makes sense, he should use a Windows technician for Windows right?

This part of the con takes a few more minutes and finally the victim has all the assurances he needs.  He says okay, because it’s worth a $100 a month to have a safe computer!  He unwittingly has turned over control of everything on his computer to some guy from who knows where?  But, the best is yet to come.

Months go by, in this case 12 months exactly, and Rajneedsh calls our customer and says they (Windows) changed accounting firms and it was determined he (victim) has been over charged by exactly $40 and refund is due. (Oh lucky day and how honest of good ol Raj!) He is told to expect a $40 deposit in his account today.

The victim and the conman have established a wonderful working relationship, what could go wrong?

Well, Raji calls back about an hour later, he’s rather frantic and says he’s made a terrible mistake, he deposited $4000 not $40 and he’s going to be fired unless the customer refunds the money to his account right away.   Victim agrees, after-all, Raji is such a nice young man and he’s been so helpful.   So, the victim goes to his bank and sure enough there is a $4000 deposit just like Raji said and he dutifully withdraws the money and sends it to Raji’s bank account where Raji retrieves it.

Where’s the scam? The $4000 actually was from the victims own savings account.  As it turns out Raji could NOT withdraw the money, but he could transfer the $4k to the victim’s checking account and by using this ruse he gets the victim to give him his own money.   Yep, he paid Raji back with his own money, ain’t that just niffty?  He’s also out $1200 for a phony computer virus scam.  There was never a virus, just like there is no company called WINDOWS!  Windows is a computer program and its made by Microsoft.  How people could not know this by now is amazing to me.

When the hapless victim realizes he’s been had big time and he finally goes to the cops, guess what happens? They say they will do all they can, but as soon as the victim is out the door, it goes to the closed case file. NOBODY in law enforcement is interested in this kind of case, NOBODY.  For a miriad of problems, cops don’t work these cases, only the FBI does, but only for really big time capers.

The cops know that at least 95% of the time, the country of origin doesn’t even have an extradition to the U.S.   And the FBI cyber-crimes unit, well, even if they could get an extradition, they are not about to spend $100K to recover $4K.   It just isn’t going to happen.

This crime is repeated thousands of times a day in America with a good percentage of the people actually falling for the scam, incredible as it may sound here. Yes, the FBI has online reporting service, but the four or five guys that work in this department get about 50,000 new cases a week…what are the odds they are going to help you out?

So, a word to the wise…when the phone rings and someone wants to [help] you fix a problem on your computer for free, hang up!   Don’t argue, just hang up and then send me a thank you note written on a $10o bill.  Hey, at least I’ll spend here and not in Jakarta or Istanbul!