Would you hire this guy, with a massive face tattoo that says, DEVAST8?  He ran out of face to write the whole word.

Several weeks ago Mark Cropp, 19, went on social media to beg someone to give him a break and let him prove he can be responsible and hold down a full-time job after leaving prison, where he obtained his tattoo.

Within hours of posting his video he revealed he had been deluged with job opportunities and admitted he “stopped counting” when the number of offers reached 45.   However, he still hasn’t worked a day. Mark says he is holding out for just the right job! He sounds like a great candidate for being homeless in Chico. No chance of anyone offering you a job here Mark, we just give you money and whatever else you want. Come to Chico, we want you! 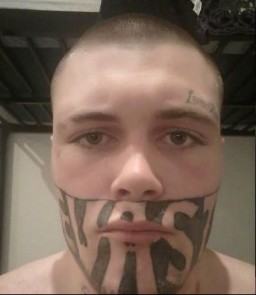