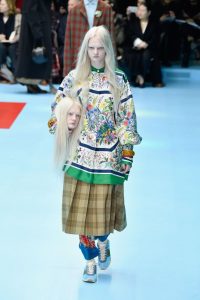 High fashion can’t be credited for the sick state of society but it can act as an indicator of the unprincipled depravity infecting our world. One of the world’s best known high fashion names, Gucci, serves as an example during Milan Fashion Week. The designer is Alessandro Michele whose Cyborg theme included models carrying what appears to be their own severed heads….lovely.

The following is excerpted commentary of the event by Julie Tong at Yahoo News:

On Wednesday afternoon during Milan Fashion Week, Gucci staged a spectacular yet peculiar fashion show that included “cyborg” models — which, upon a deeper look, possessed an underlying metaphorical feminist message.

In the Gucci show notes, creative director Alessandro Michele referenced A Cyborg Manifesto, written by Donna Haraway in 1984. In it, Haraway uses the concept of a “cyborg” to represent women, without the constraints of society’s traditional gender labels. As one Wired writer notes, the cyborg in Haraway’s piece “trashes the big oppositions between nature and culture, self and world that run through so much of our thought.” …

… It poses the idea that all of us are not “naturally made” — or rather, we are “constructed,” like a cyborg. …

Michele’s vision for Gucci includes models who are genderless: Men wear “women’s” clothing and vice versa, something he has done for several seasons now. He toys with the idea that in the future, traditional notions of men and women will no longer exist. As written in the show notes, “The collection goes further beyond, taking the shape of a genuine Cyborg Manifesto (D.J. Haraway), in which the hybrid is metaphorically praised as a figure that can overcome the dualism and the dichotomy of identity. The Cyborg, in fact, is a paradoxical creature keeping together nature and culture, masculine and feminine, normal and alien, psyche and matter.”

“Gucci Cyborg is post-human: it has eyes on its heads, faun horns, dragon puppies and doubling heads. It’s a biologically indefinite and culturally aware creature.” He refers to these “Gucci Cyborgs” as mongrels, which suggest indefinable, intermixed breeds.

This is what passes for creativity or brilliance in the design and art world. Make no mistake, it is also reflective and indicative of the belief systems being pushed as forward thinking and truth in educational and entertainment circles. We humans are not “naturally made” is the type of message every child should yearns to hear from it’s mother and father…right?

In my mind this theme is ugly, deranged, and toxic.

Given the absolute garbage we are all exposed to on a daily basis, given the rhetoric of the so-called brilliant among us is it really a big mystery that many of the youths of America are confused, dysfunctional…and searching for a sensationalized identity? Contrast with the incidental role models of bygone eras…the great painters, composers, writers and designers.

This entry was posted in Education, Morals and Ethics. Bookmark the permalink.