Could this be the precursor to the big one? I sincerely hope not, but we know the San Andreas could let go anytime. I’m posting this in the hopes that folks will take reasonable precautions as best they can if the worst should happen.

“Looking in that general region, I’m counting 55 quakes just in the last week,” said Amy Vaughan, a geophysicist with the Geological Survey.

A series of small earthquakes shook the area around Danville, including one with a 3.3 magnitude.

A cluster of small earthquakes continued to shake the Danville area into Friday afternoon, measuring as strong as magnitude 3.5, slowing BART trains, but causing no significant damage, authorities said. 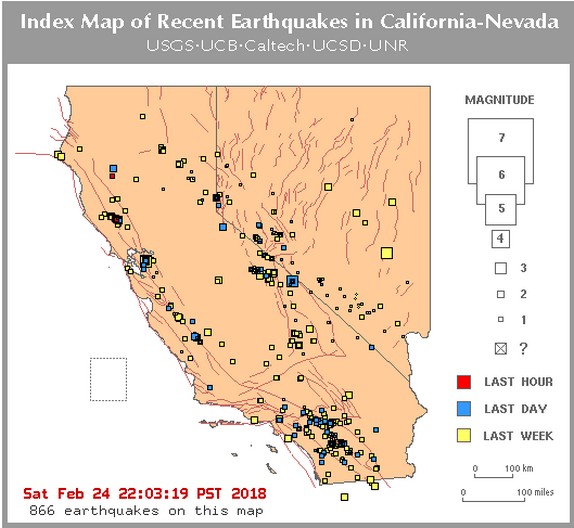 As of 1 p.m., the U.S. Geological Survey had reported 16 quakes in the area, with five of them above magnitude 2.5. The 3.5-magnitude temblor happened at 12:19 p.m. Friday near Diablo, a wealthy community northeast of Danville.

An overview of the San Andreas and Hayward faults.

And this by Martin Nascimento,

“When BART receives reports of earthquakes, it stops trains until it can get information from the Geological Survey.

If the magnitude is lower than 3.0, trains can start running under automatic controls. If it’s higher than 3.0, operators run trains at low speeds, under manual control, for about five minutes while conducting visual track inspections.”

The quake cluster mostly consisted of shakers too small to feel, but a 3.3-magnitude event struck at 5:28 a.m. about 1 mile northwest of Danville, according to the Geological Survey. In the hours before, quakes of 2.8 and 2.7 shook the area.