Poverty in US – Nikki Haley Isn’t Taking Any Guff 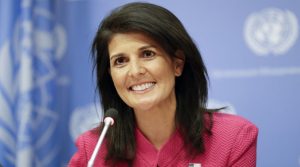 Thank God for Nikki Haley. She isn’t taking any guff from radical socialists like Bernie Sanders in the US or the haughty ambassadors at the UN who play political games all day long, (mostly) on our dime:

WASHINGTON — UN Ambassador Nikki Haley told Sen. Bernie Sanders (I-Vt.) that a UN report declaring that “contempt for the poor” is growing in America along with wealth inequality was “politically motivated” and “misleading.”

After the initial report from United Nations’ special rapporteur on extreme poverty and human rights Philip Alston was issued earlier this month, Sanders and 19 other Democrats sent a letter to Haley urging that the administration take heed of the report and present an action plan to combat poverty. …

… In a letter to Sanders dated today, Haley told the senator that “poverty is an issue the Trump administration takes very seriously,” and “being able to provide for one’s self and family is empowering, both economically and spiritually.”

Haley said she was “deeply disappointed” in Alston’s report and branded it a waste of UN funds. “There is no question that poverty in America remains a serious concern, but it does no one any good to inaccurately describe its prevalence or its causes,” she wrote. “It is patently ridiculous for the United Nations to examine poverty in America.”

American elected officials, she continued, “engage on poverty issues every day” while some other governments around the world “knowingly abuse human rights and cause pain and suffering of their own people” and in Burundi a person makes about $280 a year.

“Rather than using his voice to shine a light on those vulnerable populations, and so many others, the Special Rapporteur wasted the UN’s time and resources, deflecting attention from the world’s worst human rights abusers and focusing instead on the wealthiest and freest country in the world,” Haley continued.

You can read the absurd accusations hurled at the US at the link.

Haley also removed the US from the UN Human Rights Council on June 19th calling it a “cesspool of political bias” and pointing to outrageous hypocrisy:

The Trump administration said goodbye to the United Nations Human Rights Council last week, because it hasn’t lived up to its name.

“If the Human Rights Council is going to attack countries that uphold human rights and shield countries that abuse human rights, then America should not provide it with any credibility,” U.S. ambassador to the UN Nikki Haley informed the council Monday.

TownHall cites the left leaning Atlantic, a publication that couldn’t find fault with the decision and pointed out the council’s “major flaw.”

…”Consider the current members of the Council: Venezuela, where President Nicolas Maduro has strangled the political opposition and free speech; the Philippines, where President Rodrigo Duterte’s policies have resulted in extrajudicial killings of suspected drug dealers; Ethiopia, where a state of emergency in place since February gives the government draconian powers that it wields liberally; Cuba, where the idea of human rights have been discarded for decades; Hungary, where Prime Minister Viktor Orban’s policies have targeted the media, the opposition, civil-society groups, and immigrants; Saudi Arabia, where widespread abuses and arbitrary arrests continue; China, which has long stifled dissent; and Egypt, which has effectively banned any criticism of the government.”

Haley is one strong woman and a great ambassador! She not only talks the talk, she walks the walk…much like her boss.

Where the he77 were these agitators over the last eight years as poverty levels and homelessness grew? Oh, haven’t you heard? The radical left NEVER owns up to it’s SCREAMING failures!

Note to the rest of the world: Try capitalism, freedom, and the rule of law! Works every time it’s tried to address poverty and offer upward mobility to the poverty stricken.

Note to Bernie Sanders and his Dem pals: Trump already has a plan and it’s been set in motion…stay tuned, weasels!