The Mixed Bag that is Donald Trump

If there’s one thing you can say about President Trump,….well, uh, then you are the rare 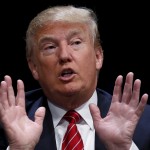 exception.   Because you just can’t say one thing about Trump, he’s way more complicated than that!  On Monday you can love him and by Tuesday you can hate him.  However, if you are a reporter for NBC, CBS, ABC or CNN, you’re pretty much in the hate camp all the time.

Trump has done some great things and he’s told off smug, snooty bureaucrats in the process.   He has started to pump out the swamp and I love that part.  But, he just can’t keep his mouth shut even when it’s to his advantage.   He’s neither a Republican nor a Democrat, he’s brilliant and he’s a dope, he’s just “the Donald,”and he is an original.

In the latest controversy, his continually exhausted critics ( struggling to keep up), claim he was bamboozled by Putin into believing America’s intelligence agencies may have made a mistake about Russian meddling in the 2016 U.S. elections.  But, let’s be real, if you were falsely accused allegedly by the same intelligence sources, you might feel the same way.  Special investigator Robert Mueller has had over one year to show that Donald  Trump  colluded with the Russians.  As of today, Mueller has nothing to link Trump to anything.

Mueller has indicted a number of Russians suspected of tampering with the 2016 election, but that’s far short of a conviction.  We’re supposed to say, innocent until proven guilty.  I [think] they were guilty, but like Mueller, that’s just my opinion at this point.   As for Trump, we are fast approaching the time to say enough!  Either find something on the man or stop investigating, this has to end.

Here’s a parting thought…. rather than investigating Russia, which has had no discernable influence one way or the other in the 2016 outcome, we ought to be looking at another country that has had a major impact on our elections.   Let’s take a look at how Mexico has manipulated U.S. elections.  No country on earth has had the impact of Mexico.  CA is a prime example of how packing the electorate to elect far left liberal pro-Hispanics has all but raised the Mexican flag over  the capital.  Thanks to unchecked immigration, many places in CA now look a lot like a barrio in some Mexican border town.

40 Responses to The Mixed Bag that is Donald Trump