Under normal conditions a top secret (TS) security clearance is good for 5 years. If a TS holder switches jobs and no longer requires a TS clearance, it is automatically put on suspension for the next 2 years or until the 5th year, whichever comes first. If it is required within that time frame, it can be easily reactivated. However, if it goes 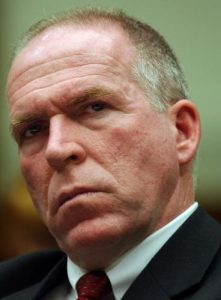 beyond the 5th year a new background check must be done by the FBI. Each time a TS background check is done it costs the taxpayers about $175,000. People who leave places like the CIA or the military, to go into private contracting, are not normally entitled to a taxpayer funded background check.  However, there are exceptions.  If for example, they are a key government sub-contractor.

When the White House revoked the TS clearances of Brennen (ex-CIA) shown on left, Comey (ex-FBI, Strzok (ex-FBI), et al, it was done in accordance within the protocols establish decades ago.

These former officials had no further access to classified materials and as a result, their TS clearance was placed on suspension, but it would have expired on the last day of the 24th month that it was not in use anyway. Security Clearances are the property of the US gov., not the individual that they were issued too. It’s always been that way.

FBI Deputy Director, Andrew McCabe lost his clearance and was fired for (3) three separate violation’s of the FBI Code of Conduct / Code of Ethics. Lack of candor under oath. Lack of candor when not under oath. Improper disclosure of non-public information to the media.

McCabe lost his TS clearance immediately after being fired, as was right to do under the circumstances. There have been other FBI agents that have lost their TS clearance for other breaches in the code of conduct. Drunk driving for example can get an agent fired. Moral turpitude can also be cause for firing and loss of TS clearance. Speaking in public against the Commander-in-Chief while in the military or in Federal Law Enforcement, is a terminable offense and possible jail time for military personnel. For them, it is covered in the Uniform Code of Military Justice.

Military and all law enforcement officers absolutely do not have the same freedom of speech rights that a regular citizen has, it’s part of the job requirement and it always has been. For example a Federal Agent can not take part in a civil protest against the President or the government. They can not publish criticisms of the President or denounce the USA. They must remain A-political for obvious reasons. These are all documented, time tested events that will lead violators to an immediate termination of employment and loss of clearances.

President Trump did not politicize anything to do with revoking of TS clearances. The people in question did. They brought that on themselves and they should have expected their TS clearance to be rescinded, this is SOP and has been for decades.

Who in their right mind would want a strongly biased (former) law enforcement official or CIA agent to have access to highly sensitive documents that could be used to undermine a duly elected President?

This entry was posted in Military, Morals and Ethics and tagged FBI top secret clearance. Bookmark the permalink.

12 Responses to Facts About A top Secret Security Clearance