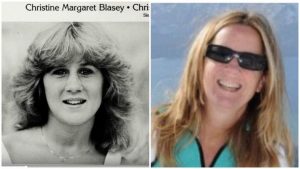 Yearbooks from the years Christine Blasey-Ford attended Hilton Arms are somewhat racy, which begs the question, “What were the parents and school authorities and teachers thinking?”

Democrat activists are apparently worried about it. Copies of the books have been scrubbed from the internet. There’s a problem, of course, hard copies are out there. Also, a fast thinking blogger was clever enough to capture the web copies before they were scrubbed…they are a revelation:

And it would be an accurate headline. That’s why the yearbooks have been scrubbed. They are a testament to the incredible power these girls had over their teachers, parents and the boys of Georgetown Prep, Landon and other schools in the area. In the pages below, you will see multiple photos and references to binge drinking and the accompanying joy of not being able to remember any of it.

These yearbooks are, therefore, relevant to the national investigation now being conducted in the media, in homes, and in the halls of Congress. And they should not have been scrubbed. If Brett Kavanaugh’s yearbooks are fair game, so are these.

And you will wonder while reading them, why the hell did the faculty approve of these yearbooks? Why did the parents take out paid ads in these yearbooks? Animal House had nothing on the infamous “Holton party scene”. …

… While preparing this report, I came across a biased viral article from Heavy.com that portrays Christine Blasey and Holton-Arms as the very essence of high school purity. As for the school itself, when Blasey attended it, nothing could be further from the truth, as you will see below.

You’ll have to go to “Cult of the 1st Amendment” at the link above to view pictures with captions that were captured from the yearbook. The following captions are an example:

Scribe 84 is the yearbook for her senior year. Her name was Christine Blasey in high school, often referred to as “Chrissy”. In the image below, Blasey is pictured at a Halloween party in her junior year. The caption on the right says:

“Lastly one cannot fail to mention the climax of the junior social scene, the party. Striving to extend our educational experience beyond the confines of the classroom, we played such intellectually stimulating games as Quarters, Mexican Dice and everyone’s favorite, Pass-Out, which usually resulted from the aforementioned two.

Sanctioned (by school authorities and parents) racism was also evident in the captions: “At Cheryl’s multi-class party…[Redacted name] came as an uncanny Buckwheat, although she washed the makeup and afro off before the guys showed up.”

Uncanny Buckwheat wouldn’t want to lose the opportunity to look seductive when the guys arrive!

The idea that anyone, male or female, should just automatically be believed when accusations like this are made is absurd! The local police authorities and courts are the appropriate place to make such claims and they should be made in a timely fashion in order to preserve evidence and ensure more accurate testimony.

Brett Kavanaugh is being subjected to condemnation in the court of public opinion. It’s despicable…despicable is the current state of the Democrat Party!

Kavanaugh’s accuser’s attorney Debra Katz isn’t just an ordinary lawyer you might find in The Yellow Pages. This Washington, D.C.-based attorney is a partner at the firm Katz, Marshall, & Banks, and the Vice Chair of the Project on Government Oversight, which is funded by George Soros and his expansive Open Society Foundation financial support.

Katz is tied to a letter the Project on Government Oversight sent to the Senate last month to demand more records on Judge Kavanaugh. Three weeks ago, she was part of the coordinated effort by Democrat-supporting organization trying to make a scandal out of a lack of records on Kavanaugh, despite the massive paper trail that was publicly released, after Kavanaugh’s extensive career in government and as a judge. …

Interesting, Katz’ has a long career involving sex scandals in politics. Back in 1998, when Paula Jones made a complaint about then-President Bill Clinton, Jones suggested Clinton called her to his hotel room alone and that’s when Clinton exposed himself. After Jones rejected his advances, Clinton made intimidating comments. Katz’s response is quite interesting:

Katz dismissed Jones’ assertions on March 30th,1998 on CNN’s “Talkback Live” saying that, “Paula Jones’ suit is very, very, very weak. She’s alleged one incident that took place in a hotel room that, by her own testimony, lasted 10 to 12 minutes. She suffered no repercussions in the workplace.”

Likewise, Katz again said on CBS’ Evening News on April 2nd, 1998 that Jones’ allegation could not hold up in court because, “Clearly a one-time incident that took place in 10 to 12 minutes, she was not forced to have sex, she left on her own volition, the courts increasingly are finding that that is not enough to create a sexually hostile work environment claim.”

Katz, who has been described by The Daily Mail as a “top #MeToo attorney,” also was dismissive about allegations made against former Minnesota Senator Al Franken (D), who recently resigned:

As Washington wrestled with how to categorize Mr. Franken’s behavior, which was accompanied by a photo that showed him appearing to grope Ms. Tweeden as she slept on a military plane, even some ardent defenders of women’s rights said the senator’s offense was not so grievous as to require his resignation.

“This is not a Harvey Weinstein situation,” said Debra Katz, a civil rights lawyer who handles sexual harassment cases. “Harvey Weinstein was a serial predator who used his power to put women in very vulnerable situations. He abused that power by sexually assaulting women. That’s not what this is.”

Yeah…it’s not that Kavanaugh is an evil man, Libby, it’s that he’s a Republican appointee.