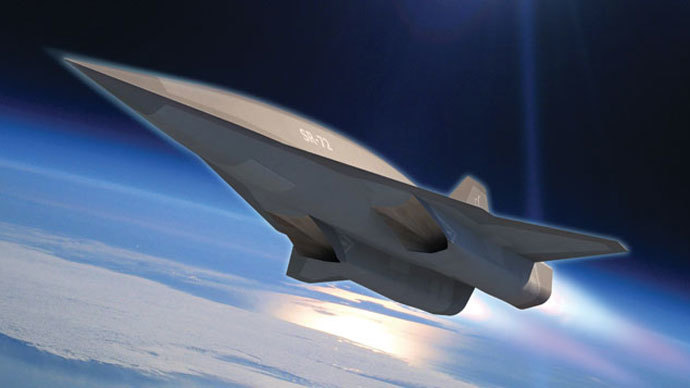 Aircraft experts and military aficionados have cause to rejoice now that Lockheed Martin has debuted the SR-72 unmanned spy plane, the long-awaited successor to the SR-71 Blackbird and potentially the first hypersonic craft to enter service.  5 years ago this plane was an artist’s concept, now it’s a lot more.

Plans for the SR-72 drone were first unveiled Friday in an Aviation Week article which revealed that Lockheed Martin’s Skunk Works advanced development program has drafted plans for a plane that could fly as fast as Mach 6 – twice the speed of the Blackbird.

The SR-72 would have the ability to gather intelligence, conduct surveillance and reconnaissance, and launch combat strikes at an unprecedented speed. The plane is designed to fill what is considered in military circles to be a gap in capabilities between the spy satellites orbiting Earth and the manned and unmanned technology meant to replace the SR-71.

The original Blackbird, which was introduced in 1966 and served until 1999, was primarily used by the US Air Force and NASA to collect intelligence through the Cold War. Along with flying at speeds fast enough to outrun a surface-to-air missile, the Blackbird also avoided enemy radar by flying at low altitudes. A total of 32 aircraft were built and, although 12 were lost to accidents, not a single one was lost to enemy combat.

Yet the sheer cost of replicating the Blackbird has prevented the US military from commissioning such a powerful weapon at a time when the Air Force has dominated international skies with the drone program.

But Lockheed Martin now believes it has encountered a technological breakthrough rendering the conversation around costs irrelevant.

Brad Leland, portfolio manager for air-breathing hypersonic technologies, said the crux of the new project hinges on an air breathing engine that combines the traditional turbine with a scramjet. The US Defense Advanced Research Projects Agency (DARPA) explored the idea on previous projects but abandoned it because of cost.

“The Skunk Works has been working with Aerojet Rocketdyne for the past seven years to develop a method to integrate an off-the-shelf turbine with a scramjet to power the aircraft from standstill to Mach 6 plus,” Leland said. “Our approach builds on HTV-3X, but this extends a lot beyond that and addresses the one key technical issue that remained on that program: the high-speed turbine engine.”

This entry was posted in Military. Bookmark the permalink.