Giving a Gift that Counts

I wonder how many parents would consider giving their kids professional driving lessons as a Christmas gift?

It’s one of those gifts that keeps on giving, possibly for the rest of their lives!

4 days ago  my son called me from his car after witnessing an accident on Hwy 99 not far from Modesto.  A 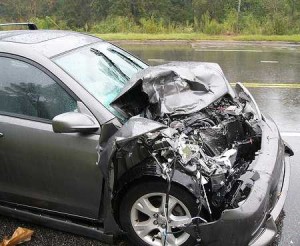 young female driver passed him doing about 75+ in her new Honda, in the rain and in the dark…all bad combinations.

As a police officer (off duty) he judged the safe speed for road conditions to be about 60-65 mph.   70 mph is the max speed one can go, under perfect weather conditions and in daylight with light traffic.  And this night time rain storm was far from meeting those conditions.   Past experience tells me, even if the storm was dropping cannon balls, no California motorist is going to slow down to a measly 60 mph! It’s just not in our DNA.

Anyway, back to [my] story.  So, about 5 minutes later my son sees the female driver again. She has lost control of her new Honda and smashed it up pretty good.  Probably due to hydroplaning on the sheets of water streaming off the pavement.  It appeared as if she hit her brakes as the car started to drift, a common mistake.  Touching the brakes, even lightly will cause a spin and it looked like she had smacked the concrete divider at some point.

Under such conditions a car takes a long time to reach a stop. On reflection, that was probably a good thing because there was a guy riding her bumper. He would have likely hit her, if she had enough traction to stop quickly.   As it was, he stopped short of her car by about 2 inches! Heck, that’s almost good enough for safe driver award. “No officer, I wasn’t following too close, I stopped in plenty of time.”   Unfortunately his luck did not last long.  There was also a guy tailgating him and he did not react fast enough or did see the wreck unfolding until it was too late. He center punched the rear of vehicle #2.  Now we have 3 vehicles involved. And unknown to all involved, a gamblers bus is about 2 minutes behind and heading straight for them… also at 70+. Geez, doesn’t anyone ever slow down in the rain? Apparently not.

See the wreck ahead, my son pulls his car over to the shoulder, quickly checks for injuries and calls 9-1-1. Simultaneously, he’s sprinting back to his car, pops his trunk looking for flares. He then turns on his super bright police kel-lite to warn oncoming traffic.  He uses the kel-lite like a wig-wag signal light.   A couple of cars don’t react. They speed by in the #2 lane at 70+. Now here comes this gamblers special tour bus. 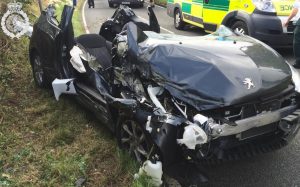 The bus driver is not slowing. “Of all people,he should have been heads up!” He says. My son is frantically waving his light back and forth and then he shines it right at the bus. This works or maybe the driver just finally wakes up. The bus driver hits the brakes hard and swerves left, but now he’s coming right at my son who leaps even further off the shoulder and into the mud just as the bus skids past him. And then another car makes similar skid trying to avoid rear ending the bus or hitting the wrecked cars in the number 1 lane. My kid is not having a good day.

At this point CHP has arrived. No deaths and no serious injuries.  But, it was not for a lack of trying!   Between you and me, if my son had his way, he would have confiscated 3 drivers licenses and perhaps a 4th license too, if he could have caught up with that bus driver.

On his way home, he observed two more non-injury hwy. accidents.  And this was all  before he got off the freeway 30 minutes later.  He says without a doubt there are way too many driving that shouldn’t be driving.  My sentiments too.   Now, my daughter drives an ambulance in San Francisco… I can’t publish what she thinks about the average drivers in this state.  At least she gets to stick needles in some of them.

Now you know why I think giving your son or daughter driving lessons is a wonderful and thoughtful Christmas present, that is, if you want to keep them around for a few more Christmases.

This entry was posted in Life, Police. Bookmark the permalink.

8 Responses to Giving a Gift that Counts