Church Under Siege – From Within!

Disclaimer: When I was about 10 years old a classmate invited me to attend mass and I found it kind of boring. Other than that I have no connection to or nothing against the Catholic Church.

Now this. I’ve come across a huge story (maybe you’ve already heard too) that tends to explain how the Catholic Church has been increasingly embroiled in one pedophilia scandal after another, the latest being an American Cardinal that has regularly shared the television news with political dignitaries and even in meetings with several past Presidents.

However, this story is not new by any means, it’s just new to me!   Insiders says its been smoldering behind tightly locked closet doors for years.  Have you ever heard of the Lavender Mafia?  Me either, until just  recently…now this:

Ryan Fitzgerald, a well known Catholic journalist, writes, “It has various names — the Homosexual Network, the Lavender Mafia, the Gay Lobby — but whatever you call it, most people — inside or outside the Church — have never heard of it and would probably call you a crazy “homophobic” bigot for even entertaining its existence as a possibility….”

From the latest, breaking news stories, it appears a vast network of pedophiles and homosexuals are within the church and their influence extends into the highest ranks of the Vatican.

Church doctrine is and has always been, against homosexuality and of course against pedophilia in any form, but here’s the irony.  Closeted gay priests who may have been willing to come forward with evidence against the gay pedophile priests were blackmailed into silence, lest they become exposed as well.   Over time, this church doctrine has provided leverage to the pedophiles.  The unintended consequence, has been it has actually protected the pedophiles and facilitated their growing numbers in the priesthood.

The molestation problem has grown so vast that it is now no longer to be contained within the church.   The Catholic church is by all accounts in the midst of its greatest scandal since the Inquisition.

You can read more about this problem by using the search term, Lavender Mafia. I understand there is a well documented book that was just released, that gives very specific details just how pervasive this problem has become and why the Pope is unable to take effective measures to stop it.

And dovetailing into this is: “When Theodore McCarrick was defrocked on Saturday, 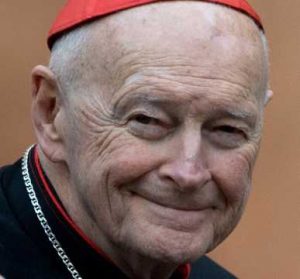 becoming the first cardinal ever removed from the priesthood because of sexual abuse, he lost his right to the support he has received his entire adult life: housing and income provided by the Catholic Church. ” He was actually moved to remote church and lives in a modest home on the church property, and this has the locals upset and angry, especially since it appears no criminal charges will be brought the former Cardinal.

2 Responses to Church Under Siege – From Within!