An American Hero – We Need More Like Capt. Eddie

Rickenbacker was a WWI ace and probably the most decorated American to come out of the war.   He opposed the New Deal as socialism and argued that kept the depression  going longer than it should.  He also opposed the income tax and believed in a limited government.  He survived being lost at sea for 17 days along with the crew from a B17 during WWII.  He also escaped death when his Dakota crashed in 41 and he was trapped in the wreckage.  If you don’t know who he was, you should.  He was quite a man of times, a great American. 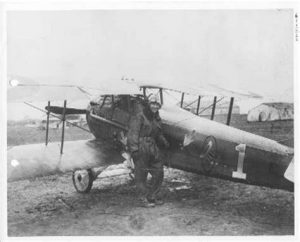 Mr. Rickenbacker, or Captain Eddie as he preferred to be known (he was a colonel in the reserve but insisted that the title of captain was the only one he had earned), was an individualist of the old empire-building school. In any kind of fight he neither asked for nor gave quarter. His opposition to Government “interference” was widely known, as were his outspoken objections to subsidies for industries or individuals. He was also an intransigent foe of trade unionism and liberal democratic concepts.

Mr. Rickenbacker was fond of saying that the greatest privilege this country had to offer was the “freedom to go broke,” and that “a chance” was the only “favor” needed to succeed in the United States.

In recent years, he had identified himself more and more closely with ultra-conservative and right-wing causes. In 1963, when he retired as board chairman of Eastern Air Lines he announced that he would devote himself to “awakening the American public to the grave problems facing them.”

In frequent speeches during the years that followed, Mr. Rickenbacker he urged United States withdrawal from the United Nations, the severance of diplomatic relations with the Soviet Union and repeal of the 16th Amendment, which authorized a personal income tax.

“I am going to expand my crusade to save the American way of life for future generations,” he wrote in his letter of resignation from Eastern Air Lines, “as I want our children, our grandchildren, and those who follow them to enjoy the American opportunities which have been mine for 73 years.”

This entry was posted in Uncategorized and tagged eddie rickenbacker. Bookmark the permalink.

2 Responses to An American Hero – We Need More Like Capt. Eddie