Trump Spat On by Waitress

Did you happen to read about the Chicago waitress that spat in Eric Trump’s face?  The place where it happened is called the Aviary.  It’s a pretty classy place, at least on the outside.  This is true of many of Chicago’s restaurants, then you see the kitchen and back alley..gag.   This one is in the downtown business district, not unlike Market Street in San Francisco.   See the picture below. 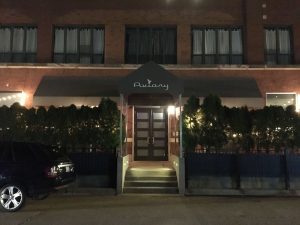 Trump was with two plainclothes Secret Service Agents and a Dignitary Protection Officer from Chicago PD.  They witnessed the incident and waitress was immediately taken into custody and removed in handcuff, much to the chagrin of the management.   Bet she didn’t see that coming!

Trump decided not to press assault charges and the waitress was released.  However, she is now on leave from the retaurant and no doubt termination is imminent or maybe not, after all this is Chicago land and strange things are known to happen, just ask Jussy Smollett.

This sort of crude behavior against conservatives or anyone associated with Trump is no longer uncommon.  If the loonies are not spitting on someone, they are falsely claiming they were spat on (Congressman was caught lying).  Or its a group of loud mouth lefties harassing a legislator at lunch because Maxine Waters said too.  Imagine, telling a White House aide to get out – won’t serve you here…can you believe the rudeness?  But, it is well beyond rude now, its criminal.  Attacking Trump supporters, like those idiots in black dawning ski masks and rioting, trampling on free speech rights, etc.

The looney left is doing all they can to lose the 2020 election with their lying, their false accusations and most especially with their uncivilized, schoolyard behavior.

9 Responses to Trump Spat On by Waitress