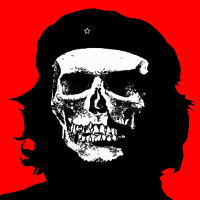 Pie Guevara appears in here courtesy of Jack Lee and Tina Grazier and is an unregistered trademark of Engulf and Devour Investments LLC, a wholly owned subsidiary of Walton Industries which, in turn, is wholly owned by David Walton.  So there!

While I love the Western Christian based U.S. traditions of celebrating Halloween especially where it concerns children having fun in costumes and extorting sweets from adults I also have had a life long fascination and love for the Mexican celebration of Día de Muertos which is also observed here in the United States.

This amazing syncretism of Catholicism and indigenous Mesoamerican culture is truly beautiful in ritual, art, religion and cultural practices. Día de Muertos is part of a multi-day celebration that involves family and friends gathering to pray for and remember those who have passed in order to aid the spiritual journey of the dead and living. It is a joyful event where passed loved ones awake and celebrate with the living. Included are the forgotten dead who have no living descendants to remember them.

Día de Muertos activities include (but are not limited to) construction of ofrendas (altars honoring a dead loved one or dead groups), grave decoration, food, bread, sweet treats, feasting and calaveras literarias (skulls literature) which are epitaphs describing interesting habits and attitudes or funny anecdotes about a deceased family member.

Día de Muertos is a southern Mexico tradition but is also celebrated in central and south America and the Caribbean. Because of limited Mesoamerican influence in northern Mexico it was not widely practiced there until the Mexican government made it a national holiday.

In aggregate (but not inclusive to all Latin traditions) the holidays are a series of events celebrated each year from October 31 to November 2. It is my understanding that on October 31 the gates of heaven are opened at midnight and the spirits of children can rejoin their families for 24 hours. November 1 is el Dia de los innocents (day of the children or Holy Innocents day) and All Saints Day. November 2 is All Souls Day and Día de Muertos where the spirits of adults can rejoin their families as the children did earlier.

Día de Muertos traditions arose from the ancient traditions of pre-Columbian cultures. Rituals celebrating deceased ancestors and had been practiced for an estimated  2,500 to 3,000 years. These ancient indigenous religious traditions sycretized with the Catholic tradition, specifically All Saints Day.

Please note: I am not an expert on Día de Muertos nor Catholic traditions, nor am I cultural anthropologist. I am only sharing what I have learned about this beautiful celebration of life and death and the meaning and depth it adds to what it means to be a human being. If I have made any errors or have left any important aspects out I welcome corrections and further details.

This entry was posted in Uncategorized and tagged culture. Bookmark the permalink.