“I do think it’s funny…” wrote The Laughing Troll in a rather pathetic snark-mock of Post Scripts because we blogged about the despicable and disgusting way progressives at Chico State recently tried to silence speaker Brandon Straka but have not blogged about an isolated heckling incident where a few, supposedly conservative, pig headed jerks started behaving like thousands of pig headed progressive jerks have behaved at literally thousands of public events on and off college campuses.

The stupid schmucks who acted up at Donald Trump Jr’s book tour launch on the UCLA campus are essentially the same cut of schmuck as The Laughing Troll and his tribe of progressive schmucks. A tribe who, amongst other absurd tenets, denies that La Raza and MEChA are racist, refuses to recognize that Antifa is actually a violent fascistic threat to a civil, open society and thinks that attacking people they do not like in restaurants with violent verbal abuse and physical intimidation is reasonable free speech behavior.

This is the same Laughing Troll who habitually minimizes, dismisses and shrugs off violent left wing protests and organized intimidation on college campuses and sneers at the free speech documentary “No Safe Spaces.”

Funny too that The Laughing Troll took care not to mention the radical left-wing disrupters at Trump’s book launch such as Refuse Fascism Los Angeles (@RefuseFascismLA on Twitter) a branch of the absurdly extreme left-wing radical group refusefascism.org.

The unhappy “conservatives” were actually protesting that the Q&A session was cancelled. Turning Point USA who organized the event decided to cancel the Q&A portion of the talk days earlier after being informed of a “pre-planned effort to disrupt the event.”

People unhappy about a cancelled Q&A is quite a bit different from radical leftists trying to drown out or shut down free speech on campus with violent protests and intimidation tactics as was done to Brandon Straka at Chico State. These same fascistic tactics of violence and intimidation to curb free speech have been deployed countless times on and off college campuses by the left in order to silence anyone who disagrees with progressive group-think.

Donald Trump Jr. was invited to UCLA to talk about and promote his book “Triggered: How the Left Thrives on Hate and Wants to Silence Us.”

Atlas Winfrey, an organizer with the activist group Refuse Fascism, told CBS Los Angeles Trump Jr. should not have been allowed to speak at UCLA.

I suggest all Post Scripts readers visit refusefascism.org and check out @refusefascism and @refusefascismLA  on Twitter (you can use a search engine to find them) just to see how loony The Laughing Troll’s friends are. Here is one of their recent tweets (the emphasis in bold italics is mine) —

@RefuseFascism
Every crisis, scandal, investigation that Trump makes it thru just strengthens him

While you’re hoping the democratic process stops him, he is busy trampling that process. Elections cannot be relied on to stop a fascist regime 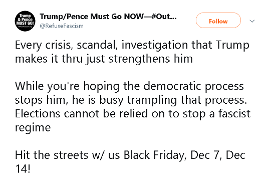 It is also sort of funny that The Laughing Troll really had nothing to say about the disgusting anti-free-speech behavior by his fellow progressives at Chico State. But then, that is to be expected.

After all for over half a century some of us have watched the left not “devolve” but rather repeatedly demonstrate its intolerant, inflexible, illogical, hateful, misguided, ill-informed, un-American, hypocritical, menacing, callous, ignorant, narrow-minded and blatantly fascistic behavior and rhetoric which now includes The Laughing Troll and his generation of spoiled, puerile, half-baked, brainwashed, turd tossing millennial moron progressive comrades on college campuses everywhere.

And now, just for fun…

This entry was posted in Politics. Bookmark the permalink.

2 Responses to The Laughing Troll