On this Day Amelia Earhart Began Her Around the World Flight 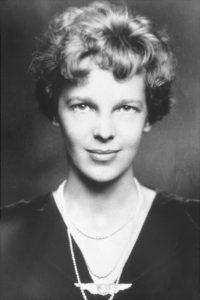 On this day in 1937, Amelia Earhart and her navigator, Fred Noonan, set off on a record breaking flight around the world.  Her aircraft was a state of the art twin engine Lockheed Electra.

They were presumed lost at sea while in route to Howland Island in the Pacific, part of the final leg of their journey.  At the time Howland Island was home for a small US Navy installation where Earhart and Noonan would tank up and resupply for the final flight back to California.

A faint radio message was detected indicating Earhart was flying in a circle having difficulty finding Howland Is.  Then there was silence.  The Navy was unable to get vector on the source of the radio transmission.  Despite a massive air sea search no trace of Earhart or her plane was found.  In 1940, 3 years later, a British survey group discovered human remains on tiny Nikumaroro Island located just outside the search area. 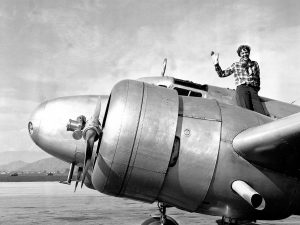 FILE – In a March 10, 1937 file photo American aviatrix Amelia Earhart waves from the Electra before taking off from Los Angeles, Ca., on March 10, 1937. Earhart is flying to Oakland, Ca., where she and her crew will begin their round-the-world flight to Howland Island on March 18. (AP Photo, file)

“Gerald B. Gallagher, the resident British administrator on Nikumaroro Island in the early 1940s, told British officials that a partial human skeleton was located under a Ren tree on the island, along with part of the sole of a woman’s shoe. Evidence of a campfire was also located nearby. Gallagher’s communications with British officials were discovered by historian and author Peter McQuarrie in 1997, according to the aircraft recovery group.

Gallagher told the British officials he believed he may have found Earhart’s remains, and he was ordered to ship the evidence to Fiji for analysis. But along the way, the remains were confiscated by a senior medical officer in Tarawa, who was unaware of their possible significance, and they were never seen again. 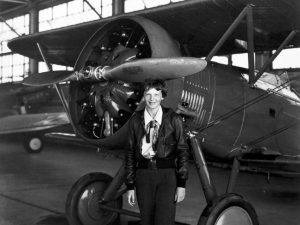 In 1991, when members of the aircraft recovery group were scouring Nikumaroro, they located what appeared to be pieces of two different shoes under a Ren tree. They were unable to make any specific identification as to whom the shoes belonged to, but they may have identified the tree that Gallagher had written about.”  Source: National Geographic

Years later a more thorough search of Nikumaroro turned up more bone fragments that were 99% likely to be that of Earhart and wreckage of an aircraft thought to be part of her Lockheed Electra.

What went wrong?  Noonan was known to be a heavy drinker.  According to witnesses the night before the fatal flight from Papua New Guinea to Howland, he tied one on.  This incident caused a verbal exchange between Earhart and Noonan.   The hangover probably didn’t help Noonan’s navigating skills as they were about 100 miles off course by the time they reached their general destination area. 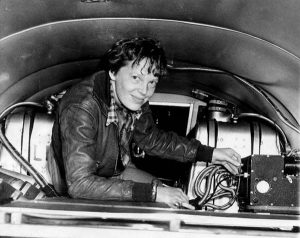 In addition the low band radio antenna on the Lockheed had not been accurately tuned and this reduced it’s performance.  At the time they didn’t think it would be a problem as it worked well enough. (Earhart is shown next her radio transmitter)

However, Earhart was on the edge of her radio reception and flying away from Howland when she tried to make her emergency radio contact.

Had the antenna been better would she have been able to find Howland Island?  We’ll never know, she was forced to make a crash landing on the beach at Nikumaroro.  The rest is now part of history.

NOTE:  Had the Navy rescuers extended their search area another 30 miles Earhart would have probably been found.

This entry was posted in History. Bookmark the permalink.