I hope you will take a moment to watch this video found by RHT. It details American hero’s at work on this fateful day 19 years ago. A day that is etched into the memories of so many as our country was suddenly and forever changed. 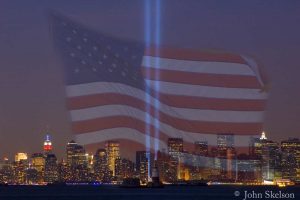 This video story about the Merchant Marine is particularly significant to me for two reasons: 50 years ago on Dec. the 7th, 1941, the US Merchant Marine Academy stepped up in defense of our country. Pearl Harbor had just been attacked and soon after the Merchant Marine was nationalized into the service and control of the United States Navy. Volunteers across the US signed up for emergency training.  One of the main centers was at Sheepshead bay, New York, not far from where the Twin Towers were located in the World Trade Center.

The new crews were to man a class of ships called Liberties and Victories. These were lightly armed cargo ships.  They went from the drawing board to the ocean in record time.  Many of them were produced in less than month using new prefabrication techniques.

This was one of the greatest undertakings for ship building in human history.  The Liberty and Victory classed ships rolled out of dry dock as if they were on an assembly line, soon to be manned by a young sailors from the Maritime Academy and the larger training base at Sheepshead Bay.  Soon they would all go into harms way, to suffer the highest combat casualties of any of the services.

My Dad was one of those young men that answered the call. He willingly took the risk because he believed in his country and he knew the Axis powers had to be stopped at any cost.

During the next 4 years he had many brushes with death and witnessed carnage and death from the Atlantic to the Pacific. He survived the war and in 1946 I was born. I never knew the connection to our Merchant Marine in New York and 9/11 until today; for some reason it just slipped my attention. But, I’m glad I know it now.   That’s why I feel personally connected to this story, but not only because of my Dad’s experiences, but also by my own too.   Oddly, I would later serve aboard one of the few US Navy Victory ship that was still doing its job to support our armed forces, just like my Dad did during WWII. Only this time it was during the Vietnam war.

My Dad and those old Victory ships are gone now.  Nothing left but memories, but I’m glad I had that [personal] connection now I know that lesser known story from 9/11.

Paul Harvey was fond of saying, “And now you know the rest of the story.”