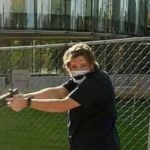 The private security guard for local station 9News who shot and killed a Trump supporter on Saturday has previously bragged about being confrontational with conservatives.

Matthew Dolloff has been arrested for the shooting of veteran Lee Keltner as leftist militants held a counter “protest” to a pro-Trump rally in Denver on Saturday.

UPDATE: Matthew Dolloff (DOB 03-07-1990) is being held for Investigation of First Degree Murder in connection w/the shooting that occurred yesterday at 10 W. 14th Ave. This remains an active investigation; any additional updates will be released as it becomes available. #Denver https://t.co/1Y7Yw7stL0 pic.twitter.com/Va3Lvc1CwT

Dolloff has far left posts on his social media going back nearly a decade, and in 2016 he bragged about calling a Trump supporting stranger a racist to their face.

“Ran into a Trump supporter with a Trump Button on their shirt. Told them i like their im a racist button. They had nothing to say,” Dolloff wrote, with the hashtag #F-ckTrump