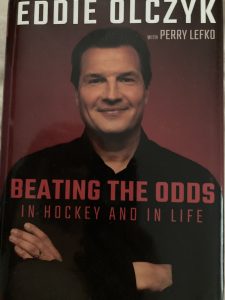 Stuck at home are you?  Tired of surfing the net, streaming reruns, or playing Sudoku?

Maybe a good book will help cure your COVID blues.  Books are those paper things you hold up to your eyes where you actually turn pages.

I plug three page turners that have helped me through this COVID fiasco, great reads from cover to cover.

“Beating the Odds, In Hockey and in Life” by former NHL player Eddie Olczyk.  The hardest part of Olczyk’s book is reading his name (which is ironically a 50 point Scrabble word).  From Chicago, his story begins as one of the city’s first native sons to make the Blackhawks.  Olczyk skated for Team USA in the 1984 Olympics and then played pro hockey for Chicago, Winnipeg, Edmonton and the New York Rangers.  Olczyk also handicaps horse racing.  A former NHL coach, Olczyk calls play-by-play for pro games.  He’s been traded, fired, re-traded, injured, and traded again but never lost his sense of humor or family ties.  Cancer nearly killed Olczyk several years ago but the man kept his faith, humor and humility.  I’d love to have a beer with Eddie Olczyk.  Here’s Olzcyk scoring in a Stanley Cup playoff game against the Minnesota Northstars (April 1985). 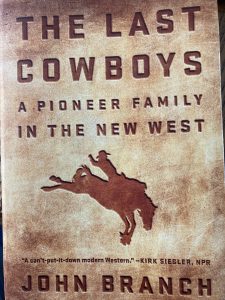 “The Last Cowboys, A Pioneer Family in the New West,” by John Branch.  The book is a phenomenal story about the Wrights, a multi-generation cowboy family that settled in southeast Utah over 150 years ago.  The family ranch now abuts Zion National Park.  To help make ends meet the Wright boys compete in rodeos throughout the western US.  Eldest son Cody Wright has won the Super Bowl of saddlebronc riding several times and his boys carry the tradition onward.  The Wrights are the first family of rodeo.  See this snippet from CBS 60 Minutes….

“Born a Crime,” by Trevor Noah.    From South Africa, Noah was born a crime during apartheid days, the son of a black mother and white Dutchman.  In those days mulatto kids were a crime- they fell into no man’s land. Not black, not white, not wanted. Here’s Noah’s view on racism:  In America you had the forced removal of the native onto reservations coupled with slavery followed by segregation.  Imagine all three of those things happening to the same group of people at the same time.  That was apartheid.” 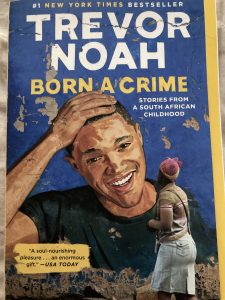 In Born a Crime Trevor Noah even makes his life’s upbringing funny.  He’s as funny in print as he is on Comedy Central, a class act.  Here’s Trevor Noah’s spin regarding masks and COVID.

The common thread for Eddie Olczyk, the Wright Family, and Trevor Noah is their perseverance during hard times.  They’re cut from the same cloth woven with faith, family, friends, humor and humility.

One thing about humility: Just when you think you have it, you’ve lost it.

They haven’t lost it.  Happy reading.