Anna’s father was a member of bourgeois by virtue of his education, he was an art teacher at the University.  Considered a reactionary and a member of the evil rich, the family was subjected to a great deal of humiliation and degradation.  The “Commies” made sure they were always the last to be helped when it came to government handouts.   In truth, the family was never wealthy, however, this class association enough and it was to affect her every time she sought to better herself.  She was under constant discrimination and suspicion.

By now (late 1954-55) everything was controlled by the government.   The medical system was one of the first institutions to be placed under the yoke.   Anna recalled her first experience with socialized medicine. She had a DNC in a large government hospital while Joseph was to of town working. When he could ] return to her, he found her weak and filthy. He had to bribe a nurse just to bath her. She had not been cleaned for three days!  The next day the doctor was about to discharge her. Her release was predetermined by the state and signing a release paper stating she was fit and must return to work was a mere formality.  Never mind the fact Anna had a 104 temperature and could barely move!

The family pleaded with the doctor, but it was to no avail. The state deemed she was fit for work according to the doctor he had to release her. Anna collapsed on the subway train hours later and was rushed back to hospital.  She was in and out the hospital three more times because of the complications due to her inadequate care. Anna said her new and improved medical care for all the people… nearly killed her!  A few years back while living in Southern California, Anna’s neighbor suggested she apply for free immunizations shots, Anna let her know how she felt about free medicine from the government!

The rich, moderately rich and so on, were being targeted and taken down to the labor class. This was the Communist’s way of making a point to those who were considered to be part of the rich bourgeois and at the same time elevating the working class. Now everyone would now be equal! To this end, the food supply soon became an instrument of control. By 1949 food was dispersed through state run businesses  as if they were wages in a scheme generally referred to as,
“receiving your calories.” Ironically, much of that food was actually humanitarian supplies from the West. But, all of it was carefully re-stamped as originating from the Soviet Union.

One day after work Joseph was taking a short cut home past the rail yard as a train pulled in.  He witnessed refrigerator cars of meat being off loaded from western
humanitarian sources and now being re-labled to say, “CCCP” or the Union of Soviet Socialist Republics.

Joseph Stalin died in 1953 and a general thaw in east-west relations lead to a slight liberalizing of the Hungarian regime. In 1953 Rakosi’ Stalinist government was replaced by Prime Minister Imre Nagy. However, in 1955 Nagy was too liberal and Rakosi returned to power with a heavy handed policy toward the opposition.

By 1956 the situation was extremely desperate. The Hungarian people were all working, but the economy was going nowhere and food  was in very short supply. “As far back as 1950 our money was worth nothing and if you don’t work you don’t get nothing, you don’t eat.”, Black market goods were available yes, but the penalties were very severe for anyone caught with too many goods.  An extra bar of soap could land you a two year prison sentence at forced labor.”  Joseph S.

The police state was becoming more abusive of it’s citizens, especially those of the rich bourgeois. And on 23rd of October, 1956, a brutal massacre of non-violent government protestors by the Hungarian Secret Police sparked the revolution. This was the final despicable act of terror and torment, the people revolted! That act
of senseless brutality on unarmed civilians was the turning point for the Hungarian people and would result in reforms long after the revolt was suppressed. The people had filled Freedom Square in support of their Polish brothers and sisters, it was a rare and defiant act. Everyone was excited, scared and there was much talk
of freedom and anger toward their oppressors. it began with a few patriotic speeches were made to the cheers of thousands of young Hungarians, but the cheers were to be interrupted by automatic weapons, firing nearly point blank into the crowd.

The students, the workers, the on-lookers, they were cut down in a hail of bullets. From several sides the an elite Hungarian secret police unit, known as the “AHV” 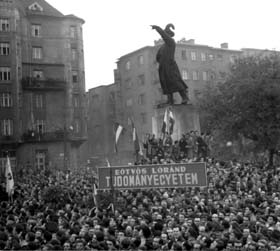 fired machine guns into the crowd, then the shooting stopped as quickly as it began, having done their worst the police realized the crowd’s fear was turning to an anger never seen before. The police retreated quickly, fearing the crowd would tear them to bits and they probably would have, if they could’ve caught them.

The news of the shootings spread like a wild fire across Budapest.    People were outraged and demanded action. As Joseph recalls, “Some people still had guns, stashed away from the war. And we knew there were a lot of guns at the police station in our area.  We took those guns by force and soon everybody had guns! They (police) did not resist much, couple of shots and they come out, but in the big police building, they fought hard there. That’s where the secret police was and many of them were killed.”

Angry mobs, mostly made up of young people and college students attacked the police stations all over the city. The stations were easily captured, most without firing a shot.  The terrified police officers who had so cruelly treated their people were being routed and now sent on their way…minus their weapons of course.

There was an irony about the shootings by the Secret Police that sparked the revolution. The student leaders and others had arranged for a peaceful demonstration that day in support of Poles, who had revolted in June and against the Soviet presence in their country.  The secret police had started the revolution they had hoped to stop in a place called, Freedom Square.  Freedom Square, where the bodies of innocents now lay dying were bordered by statues of Hungarian heroes from an earlier revolution in 1848 against Austria. This was the year when a quick succession of revolts was triggered across Europe. The first beginning with France, then Hungary separated from Austrian domination and the Slavic Serbs decided to break from their Hungarian control.

The fighting in Budapest continued sporadically throughout the city for several more days as the key institutions that held the yoke of communism fell one by one.   This time victory went to the people and Mr. Nagy was reinstated on October 24th, 1955.   Nagy declared Hungary to be a neutral country and announced the end to the one-party Communist system!   The timing of the revolt was not good since the attention of the U.S. and most of free Europe was now focused on the Suez crisis.