Prologue - Throughout their life together Joe Szepyolgyi worked a number of jobs, but mostly as a master cabinet maker.  His wife Anna was a bookkeeper, but in her younger years she was a laundry worker, forced into hard labor by the Communist.

This life today, living as American citizens is pretty good.  But, it wasn’t always like for Joseph and Anna Szepyolgyi’s, pronounced Seph-vogy, formerly of Budapest, Hungary.

Anna poured coffee and while Joe and I made small talk.  I pulled out my note book and tape recorder and soon we were talking about the old days in Hungary and how their lives almost ended with the Budapest revolt of 1956.

But, before  launch into their story you should appreciate the fact that for over four decades they had blocked the tragic and sometimes brutal memories that had brought them to America.  Telling their story was not easy for them, it dredged up a lot of painful memories, but there’s a great message here for all of us.

A history of oppression…first the Nazi’s then the Russians. 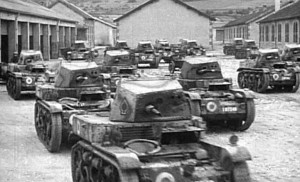 They were just kids, 14 and 10 years old respectively, when the first of many Nazi tanks rumbled through the cobble stone streets of Szentendre, where they lived.  Joseph had to scramble to get off the sidewalk and out the way of the seemingly endless flow of German military trucks and tanks.  For nearly an hour the trucks and Panzers roared past this little boy of 14 who stood silently, watching in awe from the relative safety of a stone carved doorway.   For the next two years, Budapest was an occupied city controlled by Nazis.  Just existing from day to day was  a struggle, especially for a 14 year old boy caught in war.

By early January of 1945, the Nazi’s finally left and the Russian’s quickly moved in and took their place.  A few months later an interim government was setup.  It was a coalition of diverse political parties.  They consisted of the Democrats, the Social-Democrats, the Farmer’s Party and a few others.  They actually worked farily well together, despite their sometimes opposing philosophies.  This diversity gave everyone a voice and it seemed things were starting to click.  “We all started working, rebuilding.  We got much help from the west.  Everything went fine, we had new money, we had food, everything…  and we started building up again!” Joseph explained, and for three years life kept improving, despite the widespread devastation caused by the war.

In 1936 an infamous Hungarian Communist named Matyas Rakosi had been exiled to Russia, but now that the war was over, this devote’ of Joseph Stalin returned with his Russian cronies for the 1948 Hungarian elections.  He was running with the blessings of Moscow as a candidate for Prime Minister!  Given his past lack of popularity one might think his candidacy for such a high office would have been almost laughable and he would not having the slightest chance of winning.  But, with the Russians behind me his sudden rise to power was all but assured.

Almost all of the original opposition candidates had conveniently died from one accident or another or they simply just went missing never to be seen again.  As Joseph explained, “They had an amazing number of accidental deaths and suicides.”  Rakosi’s Russian handlers in Moscow had been very thorough as the road to power was cleared.

During the weeks preceding the elections, Rakosi and the vast Communist Party offered stability and security to a country on the verge of political chaos.  The chaos was covertly caused by those offering the security.

As planned, Rakosi and his allies were voted in by a suspicious 98% of the votes cast!  Such a strong approval was soon to be fairly common in elections held within the eastern block of Europe countries.  These were all countries “liberated” by Soviet forces during WWII that remained around to insure their liberation would not fail due to a lack of security.

According to Joseph, it appeared the Soviets had let the Hungarians begin to get back on her feet and then they made their move thru their puppet,  Rakosi, to control them.   The new party boss began his administration by promising the virtues of Communism to all, first we need health care for all, and we need to raise taxes to pay for big improvements that the private sector could not do.  And in order to do that it was necessary that certain private industries that had been bailed out by government now become “nationalized.”   Rakosi assured the people he would only nationalize the largest companies and that this move was absolutely necessary if they were to prosper.

A propaganda campaign began by attacking the rich and the successful as being hoarders of the wealth.  Actually, this attack extended to anyone with any property or even a higher education.  They were considered to be part of the [bourgeois] or aristocracy.   They were the [bad] people that had been suppressing the [little] people and now it was time for the little people to take back what was rightfully theirs and it was their turn to control the progress of the nation!  Now was a time for redistributing the wealth ( Forgive me for interrupting here but,  tearing down the rich to build up the poor?  Note: Left-coast California has a new “Tax the Rich” initiative on the ballot for 1996.  But, chances are people in California are too smart to fall this one, this is just another form of Communism.   Pete Wilson-R, is the Governor and the Assembly is firmly in the hands of the Republicans.  I can’t imagine what this state would become if the Democrats ever had total control!

Now back to the story:  At about the same time citizens were forced to turn in their guns and their old radio’s or face serious consequences.  Only radios with frequencies tuned to two Hungarian government radio stations were permitted.  The multi-band short wave radios were considered contraband and more ownership would get you arrested and thrown into prison.  The new radio stations offered little in the way of entertainment or news.  Still you had a choice, Budapest one or Budapest two.  All government radio all the time.  They played rather
boring classical music and spouted the same old Communist rhetoric over and over.  It was so boring Anna and Joe quit listening to the radio.

Information, by any means, on the radio or in the newspapers was totally in the control of the state, unlike our media watchdogs in America where we have a free press.  Government identity cards were soon issued to every adult citizen.  To be caught without one was a serious offense, just like owning a radio with more than two frequencies.  Anna and Joseph kept the old I.D. cards, souvenirs of the not so good old days.  Joseph asked me if I wanted to see them and then shuffled off to the bedroom.  In a moment he returned with a large phone book sized envelope and dumped the contents on the dining room table.  Among the assortment of dog eared passports and government papers.

I noticed two dull red books about the size of a pocket Bible.     Joseph picked one of them up and said, “Everything about you is in here, (palming the little red book) who you are, what you do, where you live..  everything!  Then he said in a somber voice… “This is so when the police stop you, they know just how to handle you.”

Joseph spoke of the Stalinization of his country.  “Starting slowly, moving carefully and methodically they began seizing company after company.  They nationalized everything.  First they nationalized the big companies, then the middle size companies, then the little Mom and Pop shops and by 1949 everybody worked for government, even the shoe shine boy!  We all worked for government!  They designated to you where to go, what you do and how you do it.  If you come from a poor family, they call the poor the proletariat… then you get some job which is a little bit more important.  And the persons who had the more intellectual jobs, like a teacher or something, they went down to the labor jobs.  First the big people were taken down, then the smaller ones.”

End of Part 1 - a new part will be released every day until complete.

Matyas Rakosi was born in Hungary in 1892. He served in the Austro-Hungarian Army during the First World War. He was captured by the Russian Army and spent most of the war in a prison camp in Russia. Radicalized by his experiences in the war, Rajkosi joined the Hungarian Communist Party when he returned to Hungary in 1918. He was commander of the Red Guard in the Soviet Republic established by Bela Kun in 1919. He was removed from office in 1956 and in 1962 was expelled from the Hungarian Communist Party. Matyas Rajkosi died in 1971.