I’ve spoken with a number of Chico police officers recently about the bum problem and to a man (or woman) they all say the bums are here because of one thing…services.   It’s another way of saying, “Build it and they will come.”   This simple logic seems lost on the people of the Homeless Task Force, which is not seeking real solutions to removing the bums from Chico, instead they’re seeking to accomodate them with more services, which is 180 out of what they should be doing! 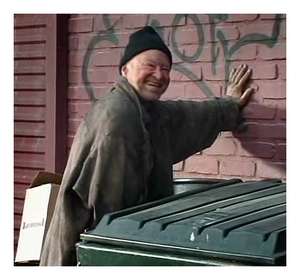 Later on today I’m going to do a photo essay of the bums of Chico and their camp sites.  These people are mostly new to the area, but if you ask somebody on the Homeless Task Force, they will point to their study that showed almost all of them are long time residents.  The police know different.  They tell me their polling was totally bogus and the bums were playing the pollsters.  They knew what to say, which establishes that the bums were smarter than those asking them the questions.

One of the problems the police have experienced is the lack of support from the court.  When they bust somebody for sleeping in the park, the court gives them a hard time and finds ways to let the defendant go.    This ticks off the cops who don’t have time to waste.

I say bust them anyway!  If and when the court starts showing a pattern of letting the bums off easy, then we as citizens can do our part bring pressure to bear on the offending judges.  L0ok, we have a good law that has been tried and tested over time and it says, you can’t camp in the park.   It’s a misdmeanor.  Yet there’s all kind of camping going on inside Chico’s Bidwell Park and we’ve got the trash to prove it.

This situation is the perfect opportunity for Chief Trostle to show the  community what he’s made of.  He needs to instruct his officers to do a few late night raids in Bidwell Park and other areas where overnight camping is illegal.   The officers would love to do this too!   They want these bums out of Chico as much as anyone.   And do be fooled, the manpower is absolutely there, it just takes a little creativity to pull it off.   For example, one officer with 3 or 4 community volunteers could have a big impact on the park campers.  But, it requires a little extra effort and some mildly inspired thinking to do it.   The question is, will the Chief make an effort or will he play it safe and stay with the status quo?