Chico State instructor John Crosby was just interviewed by Heather Hacking for the ER regarding the new book Yellow Birds, one soldiers story about the Iraq war. Crosby has co convinced himself the Iraq war was about oil, plain and simple. This is a popular view among liberal academics, so popular that it’s been reinforced ad naseum by like minded thinkers ever since the first protest slogan, “No blood for oil” was invented. 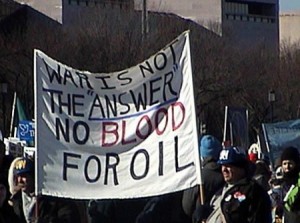 There’s only one problem. It’s not true!  Among the myriad of reasons for the Iraq war, oil didn’t even score in the top 5, yet the left touts it as the one and only reason! Well, once again the facts don’t square up with the left’s rhetoric.  (No doubt oil was a consideration at some point, but it was in no way as simple as the left would have you believe.)

If oil was the key objective for war in Iraq, where is it? Most of our imported oil doesn’t even come from the Middle East. Canada and Latin America provide about 35% of our imported oil. Another 10.3 percent comes from African sources. The entire Persian Gulf, led by Saudi Arabia at provides us with about 13% of our imported oil. Currently Iraq ship’s us less than 4.5% of our total imports. Heck, before we had a falling out with Saddam we were getting far more oil from Iraq.

Sometimes I think liberal left has a selective learning problem. But, the disturbing part of the ER story is not how wrong Crosby’s conclusions are, but that he’s teaching our kids leftist revisionist history as the gospel…despite the facts.