Planning a vacation to Turkey?  Here’s a thought… don’t go, we’re mostly hated in Turkey.    The President of Turkey is a nut-case and he’s fanning the flames of anti-American hate and bigotry.   If you happen to listen to some of his hate filled speeches he has to remind you of our own nut-case, Luis Farrakhan.  The things they say are equally stupid and absurd.  For example, Erdogan, “Muslims discovered American hundreds of years before Columbus.”  Race-monger Farrakhan will tell us that the black race were the kings and queens over a highly advance society, while the white people were still living in caves.   See what I mean?  Stupid.

President Erdogan recently was quoted as saying,  “Americans want to see Muslim children die – they are not our friends.”  That’s as crazy as some of the garbage Farrakhan spouts.

In the recent months Erdogan has accused America of expansionism and colonialism while denying Turkey’s own outrageous history of aggression and colonial expansionism for over 500 years.  (Hypocrite)  Erdogan called Twitter a menace that needs to be stamped out.  The BBC quoted him. “The best examples of lies can be found there. To me, social media is the worst menace to society.”  “Just like Hitler, who sought to establish a race free of all faults, Israel is chasing after the same target.” As Turkey’s Prime Minister Erdogan said, “They 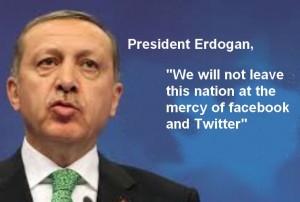 (Jews) kill women so that they will not give birth to Palestinians; they kill babies so that they won’t grow up; they kill men so they can’t defend their country … They will drown in the blood they shed,”

Our American history is not without some mistakes, but its infinity cleaner and more honorable than theirs.  Turkey, aka Ottoman Empire, looted and murdered its way around the sub-continent and large parts of Europe for centuries – they have no reason to throw stones at America.    Let us not forget that the Turks hedged their bets in WWII and had a nonaggression pact with Hitler, until they saw the Allies about to crush Germany in 1944, then they sided with us.   And before that it was the Armenian genocide in WWI, something that to this day Turks largely deny.   In case you are not familiar with this bit of history, about 1.5 million Armenians were systematically exterminated in 1915 by the Ottoman Empire, which also sided with Germany against England, France and the USA.

On a considerably lesser note than Turkey’s attempt at genocide:  Another reason, among many others,  to distance ourselves from President Erdogan and his racist politics, is his outrageous attitude towards women, especially Western reporters.   He called the correspondent for ‘The Economist’, a “shameless militant woman disguised under the name of a journalist” after she had asked an opposition leader whether “Muslim society is able to question the authorities.”  (They can’t of course, the government imposes media control over 10 major newspapers)   “Know your place,” Erdoğan said.  “They gave you a pen and you are writing a column in a newspaper. “And then they invite you to a TV channel owned by Doğan media group and you insult at a society of 99 per cent Muslims.”  The guy is an ass and worse, he’s a dictatorial, bigoted one.

But, it’s not just Erdogan, and it’s not just Turkey’s long history of conquest and civil rights abuse.   Erdogan is only a symptom of the backward attitudes that are so prevalent in Turkey today.   In a recent polling to see who ranks America in a favorable light, the anti-American sentiment in Turkey ranked higher than those in Russia and even Palestine!   You would have to venture into the camps of the Taliban to get lower “favorable” polling numbers.    So why play nice with such thugs and dullards?   Just recently a mob of Turks attacked three young American sailors in uniform for nothing more than being Americans.

So that’s it, I refuse to travel to Turkey.   I don’t care what wonderful historical sites I might miss out on.  I would rather spend my travel dollars in America.   And further, I refuse to buy anything Turkish.  I want absolutely nothing to do with this country and I don’t give a rats if they are a NATO ally.   They were not our friends during the Iraq war, they are not our friends now in the fight against ISIS.  And as the saying goes, with friends like them, who needs enemies?

If you need more reason to boycott Turkey then you have serious issues.

4 Responses to Our Frenemy the Turks – Warning Blunt Talk!