The newsprint ink has barely dried on the Copenhagen story about a Muslim terrorist that tried to suppress free speech with a gun, now comes this story:  Muslim terrorists behead 21 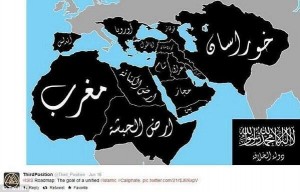 Egyptian Christians in Libya.   These men were travelling into Libya from Egypt to find whatever work they could and then return home.  They posed no threat to anyone, but yesterday they died a horrific death at the edge of the Mediterranean Sea.

They had been  captured by armed ISIS terrorists then beheaded by ”volunteers.”  The victims hands were tied behind their backs and they were surrounded by other ISIS soldiers.  This was all done while the cameras were rolling, then the video was professionally finished with subtitles and in English language and released to the internet.   It was the first video of this kind to be made outside Syria and it signals a new front for ISIS beyond Syria and Iraq.  (Show at right is the ISIS 5 year plan intended to dominate the areas in black)

This was meant as a recruiting video and they were hoping to demonstrate how strong and courageously superior ISIS fighters were compared to their terrified enemies.  In this case the enemies were unarmed Christian laborers, just the poorest of the poor, friendless in hostile ISIS controlled area of Libya.   One can only imagine the level of desperation that drove these men to find work knowing the dangers, but what is even harder to imagine is the depth of depravity that motivated these ISIS terrorists to commit this mass murder of unarmed civilians.

The response from the Egyptian government was swift.  Egyptian  airstrikes hit a suspected ISIS training camp, and several buildings,  but much like the Jordanian response in Syria after their captured pilot was burned alive in a cage by ISIS damage was minimal.   Unfortunately, it is an effort akin to swatting  scurrying coach roaches with a sledgehammer.   It’s going to take ground forces to bring these maniacs to justice.

The Italians have been watching this drama unfold in Syria and Iraq and now Libya.   They’re not unmindful of the many thwarted attempts at Muslim terrorism in Europe.   They heard the ISIS proclamations that the Pope would die and Rome would fall.   The are acutely aware of the many acts of Islamic extremism in the UK, France and most recently in Denmark.  This all has their full attention and they say they are ready to act, just as France has claimed.

Over the weekend Italy has called on NATO to send a multinational force against ISIS.   Italy and France say they are prepared to step up, so is Egypt and Jordan, but they lack leadership, something the United States had provided in the past, but now under President Obama we’re no longer willing to do, despite our complicity in the rise of ISIS and the impending fall of Iraq.

ISIS Supreme Leader Abu al Baghdadi dismissed President Obama latest denunciation of the Christian beheadings with casual indifference.   In a speech that was reminiscent of the dark ages, Abu al-Baghdadi said, “In this virtuous month or in any other month, there is no deed better than jihad in the path of Allah.   So to arms, to arms, soldiers of Islam, fight, fight.  Rush O Muslims to your state.  It is your state.  Syria is not for Syrians and Iraq is not for Iraqis.  The land is for the Muslims, all Muslims.  This is my advice to you.  If you hold to it you will conquer Rome and own the world, if Allah wills.”

Meanwhile in St. Peters square in Rome, authorities were on heightened alert.   “At Rome’s central train station, scurrying passengers barely noticed a reporter and his notebook, much less whether there’s been a [security] escalation.

“What security? This is Italy. You know how it is. People get on and off trains without the kinds of checks you find at the airport. Anything could happen,” Marco Natalini, a 34-year-old engineer who licked a gelato as he waited for his train, told VICE News. “This is a big city. If terrorists wanted to do something, there’s little the police could do besides cleaning up the mess”.

This is pretty much the situation all over Europe and in most Western nations.  In May, four people were killed at the Jewish Museum in Brussels, allegedly by a gunman who spent over a year fighting with ISIS. The suspect, Mehdi Nemmouche, is thought to be the first Syrian militant to commit attacks upon returning to Europe.”   Nemmouche may have been the first but he will most certainly not be the last.