UK – Britain raised its terrorism threat level to “severe” Friday – meaning that an attack is “highly likely” – as Prime Minister David Cameron warned that ISIS poses a “greater and deeper threat to our security than we have known before.” 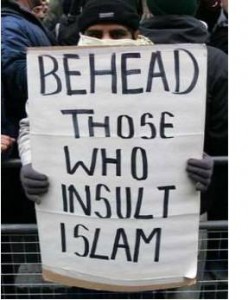 Cameron said he planned new laws to make it harder for Britons to travel to Syria and Iraq to fight alongside Islamist extremists, and said the problem posed by jihadis would last “years, and probably decades.”

Arrests guided by intelligence information resulted in two Muslims teens were arrested in Manchester and 1 Muslim man aged 29 was arrested in Stoke On Trent, all three were British citizens and the two arrest locations were not connected.

In interviews with young British Muslim men the BBC was surprised to learn that they approved of the beheading of Western journalist James Foley, saying that ISIS fighters have a right to defend themselves against America aggression.

In recent polling (46%) of British Citizens believed that Muslim immigrants had barely adopted British cultural values and (50%) believe they had made even a small effort to integrate into British society. (52%) thought that the security services do need more access to the public’s communications in order to fight terrorism.

Polling data came from UKPOLLINGREPORT and of course the above news story came from the BBC.

GERMANY –  15Feb., 2015, The popular Carnival Street Parade in Braunscheig, Germany was canceled over fears of an Islamic terrorist attack.  The event in Braunschweig draws about 250,000 people a year and it is a major boost to the local economy.  But, police said they received credible information of a planned attack by individuals ‘with an Islamic background’ and told people to stay home Sunday and the parade was cancelled for public safety.

Note from Jack:  In this instance, whether or not this was a real threat, terrorism succeeded, because it impacted the lives 250,000 Germans and it disrupted commerce and that’s how terrorism wins.

How many times will this happen before people begin to see that in the long run its far better to continue with life and not be intimidated by threats?  There are exceptions to this of course, it would be foolish to think otherwise. Risk must be measured against reward… in all things.

The United States (predictably) compounded the devastation of 9/11 many times over by taking extraordinary precautions after the threat was over and continued to do so many years.  This made Osama bin Laden’s attack on America succeed beyond his wildest expectations. Remarkably even in the clarity of hindsight the majority of our bureaucrats will still argue they all did the right thing, even though the evidence is completely to the contrary.

America, it seems, is unwilling or unable to learn lessons from history or from the current experiences of others (Israel) and we are inexplicably determined to learn the hard way! What we are great at is closing the barn door after the horse is out. 9/11 made this obvious, look at the piling on of stupid projects done solely in the name of security! We all but threw out the Constitution and put armored cars in all the police departments …and all because bureaucrats wanted to [show] how concerned they were about protecting their constituents! Even the Gridley Fair Grounds got anti-terrorist security lights.

LESSONS FROM HISTORY: In WWI we did not heed the warnings of both French and British commanders about how to fight trench warfare and we re-learned the hard way the same lessons they learned earlier.  This had to do with sending waves of infantry into open killing zones that was pre-covered by artillery and machine guns.  We wouldn’t listen and we suffered horrible and needless casualties. Stupid X 3.

In WWII the British tried in vain to get the Secretary of the Navy to place American merchant ships in convoys under armed escort, he refused saying our Navy knew best.   It was only when we suffered unsustainable losses from German submarines that we changed to the convoy system, but the cost was heavy and it was kept secret from the public for decades after the war was over, presumably to hide our incompetence.

In more recent times the warnings about how to prevent airplane hijackings was ignored. These warnings, coupled to increase hijackings did not force even the most minimal of security precautions until after 9/11.  During the 9/11 attack United Flight 93 was warned of a possible hijacking. Unbelievably, both the pilot and copilot continued their casual chatter about vacation plans and they took no immediate precautions to secure their open cockpit door. This allowed just enough time for the terrorists to enter, slit their throats and take control of the aircraft.   It was a completely preventable tragedy and this negligence cost the lives of everyone on board.

Why do we do this stuff?  Is this the result of denial because we think we’re never going to the one in the crosshairs or is it the ignorance by our leadership that fails to set high standards?

So on one hand we’re saying live life as normal and on the other, always have situational awareness. Government can’t cover all our security risks, but people can. It’s just that we have too many fat, dumb and happy Americans who wouldn’t suspect anything if a terrorist handed them a cannon ball with a lit fuse.