How Many MPG Does a Ship Get?

I heard the cost of heavy fuel oil is going up because of the new requirement for low sulfur fuel and that got me thinking about how much fuel your average ship burns and a host of other associated fun factoids.   I hope you will find this quick look at the shipping industry interesting:

Ships today are larger than ever before and that takes more fuel, but larger ships are also more fuel efficient because of that larger capacity.   Ships are almost exclusively powered by electricity, but it takes huge generators to make that electricity and they use a lot of fuel.  What powers the generators is either heavy fuel oil (HFO) or marine gas oil (MGO).  A ship will consume about .34 tons of fuel per mile traveled or in terms of MPG, a typical ship can move about 50 feet per gallon of fuel. (1 gallon of ship’s fuel = 7 lbs)   Aren’t you glad you’re not driving a ship to work? 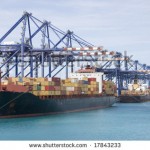 The booming cruise ship industry has placed a heavy demand on the oil industry and for purely recreational purposes.  (Cruise ships are also dumping a lot of trash in the ocean, but that’s another story.)   However, a cruise ship is also moving thousands of people, the oil consumption per person is better than the per person fuel consumption for a jet passenger plane, but a ship is also more polluting, thus there’s a trade off for fuel efficiency v pollution.

A shipping analyst recently reported, “Within five years we will need 14 million barrels of oil more per day if current trends continue. When we reach the point when spare capacity in OPEC is exhausted, then the price explosion will come.”

But, the explosion of fuel cost for ships has already begun with the US requirement for low sulfur fuel.  The new regulation is having a major effect on shipping companies.   This is adding to the cost of imported goods and of course you, the consumer, are paying more for everything that is imported.  In turn inflation in the US is also rising.   Another unwanted cause and effect for cleaner fuel.   You want low sulfur fuel  – then you will pay for it and almost all environmental regulations work this way.

To get around the new US regulations for low sulfur fuel, ships are stopping outside our territorial limit and converting over to low sulfur fuel.  So have we really accomplished much?  Not really, but it sure has added to the overhead and that drives inflation.

Currently oil prices are way down thanks in no small measure to the shale oil drilling (fracking) in the USA and that has helped cause an oil glut on the world market.   Heavy fuel oil currently costs around US$360 per ton and is expected to increase 30% because of the new low sulfur regulations, but consider not that long ago HFO was $900 a ton, a 30% increase at that price is a big hit!

Until ships are fusion powered,  they will be massive consumers of the world’s diminishing oil supply.

This entry was posted in Environment. Bookmark the permalink.

9 Responses to How Many MPG Does a Ship Get?