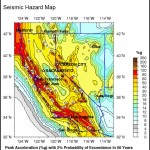 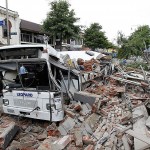 California has had it’s share of problems, from floods, to raging brush fires to one of the worst droughts in our time and now you can add another.  Scientists released a report in March of this year that forecasts the near certainly of a Northridge size earthquake to hit somewhere in California within the next 30 years.   However, Northridge was not the big one we’ve been expecting.    Studies say we have about a 20% chance a 6.0 will hit within 3 decades and there’s a greater chance that an 8.0 will hit than was predicted just a few years ago.  A magnitude 8 quake would be twice as strong as the devastating 1906 San Francisco earthquake, a magnitude 7.8.

Draught could trigger an earthquake.  A new study in the journal Nature adds an extra fear factor, suggesting the more water that’s pumped out of the ground in the Central Valley during these dire drought conditions, the greater the chance of earthquakes on the nearby San Andreas fault. 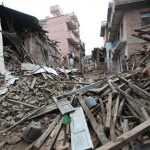 “So the idea behind this proposal is, if the ground is sinking, does that sinking cause accelerated movement along the fault? And that might be the trigger to make a fault movement occur,” SDSU geology professor Dr. Pat Abbott said.

The new report does not predict when or where earthquakes will strike, nor how big the next quake will be; instead, it provides a better sense of how often earthquakes will occur and how likely faults are to break in the next three decades. This information helps set earthquake insurance rates and building codes in California.

Three of California’s recent big earthquakes crossed fault lines: the 1992 Landers quake, the 1999 Hector Mine quake and the 2010 El Mayor-Cucapah quake. The 2007 study had chopped faults into pieces that broke separately during earthquakes.  “We’ve come to realize that we’re not dealing with separate, isolated faults. We’re dealing with an interconnected fault system,” Field told Live Science. 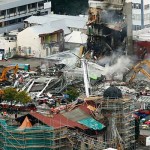 California straddles the boundary between two tectonic plates — the North America and Pacific plates — that have been sliding past one another for 30 million years. Over the millennia, Earth’s crust has been sliced and diced into hundreds of faults, forming an interconnected system that resembles a huge, braided river.

This entry was posted in Uncategorized and tagged 8.0, California, earthquake, san francisco. Bookmark the permalink.