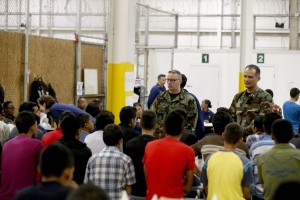 News about Obama’s budget for the coming year has leaked to the press. The Washington Examiner reports that the President has allocated $17,613 for every one of the estimated 75,000 unaccompanied Central American children expected to cross into America illegally this year. It further notes that this amount is $2,841 MORE than the average Social Security recipient will receive. But the spending doesn’t end there. Another $2.1 billion will be spent on refugees, which can include children from (mostly) Honduras, Guatemala and El Salvador. But the spending on foreigners doesn’t stop there either. As the Examiner notes, “…the administration is also spending heavily on a program with the United Nations to help the illegal minors avoid the dangerous trip by declaring them refugees and handing them a plane ticket to the U.S. where, once here, they get special legal status.” The bill for airline travel and lawyer fees wasn’t given a dollar figure making me think it’s an open-ended arrangement.

The President continues to betray the American people, especially the people who believe in this man who said deficit spending was “irresponsible” and “unpatriotic”:

“The problem is, is that the way Bush has done it over the last eight years is to take out a credit card from the Bank of China in the name of our children, driving up our national debt from $5 trillion for the first 42 presidents – #43 added $4 trillion by his lonesome, so that we now have over $9 trillion of debt that we are going to have to pay back — $30,000 for every man, woman and child. That’s irresponsible. It’s unpatriotic.”

The President was very emphatic when he made this point. His contempt for Bush was obvious. But now this same man has overseen an increase in the debt that results in a bill for “every man, woman, and child” of $200,473!

Obama’s priorities and reckless spending should anger every single man, woman, and child in America!

The consequence of irresponsible policy and spending is highlighted by CNS News:

(CNSNews.com) – In the six months that have passed since then-retiring House Speaker John Boehner and Senate Majority Leader Mitch McConnell cut a budget deal with President Barack Obama that suspended the legal limit on the federal debt until March 15, 2017, the federal debt has increased by more than $1 trillion. 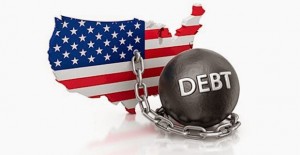 As of today our nation’s stats include:

Refer to US Debt Clock for more real time numbers.

America cannot afford the programs we’ve created for our own citizens much less a massive new poverty program for people coming to our country illegally. This is a very bad time to be running up the credit card “from the bank of China.”

Be aware voters. None of us can predict what any candidate will actually do or be able to accomplish with Congress once elected. We do know the two contenders on Obama’s side of the aisle, Hillary and Bernie, have promised more government programs and more spending. Their attitudes toward refugees and illegal entry into our country mirror those of Obama. I humbly ask that, if you voted for Obama and were genuinely outraged by deficit spending in 2008, please choose someone other than a Democrat in the election. We must put our fiscal house in order before extending ourselves further to help others. If we don’t there will soon be no difference between America, a once prosperous and charitable nation and Greece, Honduras or any other broke third world nation.

This entry was posted in Education. Bookmark the permalink.