A Tale of Two Presidents

In the wake of a military coup attempt in Turkey, President Barack Hussein Obama has offered his support and endorsement to President Recep Tayyip Erdogan. President Erdogan has been moving his country towards an Islamic style government for years. This has caused him to known as one of the most divisive, if not repressive leaders in the history of modern Turkey. Simply said, Erdogan is a danger to civil rights and democracy, according to his many detractors.

President Erdogan has ruled Turkey for 13 years with ever increasing intolerance for dissent. He harshly silences anyone who opposes him. The dissenters might range from a 16-year-old arrested for insulting the president to a former Miss Turkey who got into trouble for sharing a poem critical of the Turkish president. So far, only the Turkish military have put the brakes on and restrained Erdogan from moving further into fanaticism, as he seeks to impose Islamic law.

A military coup attempt that began a few days ago was quickly repulsed. It seemed doomed to fail from the beginning, which has many wondering if this was not a false flag event, designed to allow President Erdogan broad powers over the press and to begin a purge of his military and law enforcement. Erdogan calls the failed coup a “gift from God” and that means repression to follow.

Already about 5,000 military officers, police and judges have been rounded up for what Erdogan promises will be harsh a punishment.

Despite this drift towards an Isamic government, his ruthless purges, his attacks on civil rights and attempts at ethnic cleansing (Kurds), he has the full support of President Obama? This is crazy. He (Obama) seems oddly enamored with Erdogan and has publically condemned Turkey’s military when they pressed for democratic and secular reforms.

In early 2011, President Obama made a similar stupid move when he rushed to endorse the Muslim Brotherhood during Egypt’s desperate uprising for secular reform. Later the Muslim Brotherhood movement would be violently ousted from political power and labeled a terrorist organization. Yet, it was President Obama who called them the “good guys?” I don’t understand his thinking – it just makes no sense. 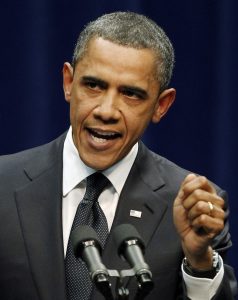 President Barack Hussein Obama has made many disastrous foreign policy blunders in Libya, Sudan, Chad, Congo, Syria, Iraq, Iran, North Korea, Russia and the Ukraine. His jaw dropping blunders have shown weakness when strength was required. They have shown a lack of resolve when the proper path was steadfastness. One wonders, could he have done any worse? Not according to our allies. They have found America under Obama to be unreliable and impotent. As a result, we’ve lost respect and that translates to placing American lives at greater risk, both at home and abroad from radical Islamic terrorism.

Obama has, through number of tactical and strategic blunders, empowered America’s enemies, and so much so that one might conclude he did it deliberately!

For example, as our first black President Obama had an extraordinary opportunity to advance race relations and make sweeping changes to bond Americans. Instead he has us more divided than at any time in the last 40 years.

Obama has single handedly caused a great void in global leadership that has been eagerly exploited radical Muslim terrorists and that has made the world a much more dangerous place. In the latter example he is much like President Erdogan. While Obama embarks on a crusade to grab guns and weaken the 2nd amendment, his counterpart in Turkey is rounding up dissidents and silencing the free press. Erdogan and Obama can’t be out of office too soon. . . in my opinion!

7 Responses to A Tale of Two Presidents