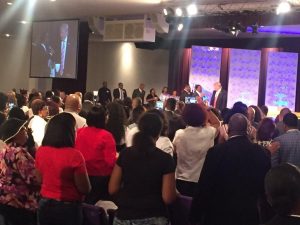 Donald Trump was invited to speak at the Great Faith Ministries International. He did so on Saturday and was well received including being given a standing ovation. Video/Audio available here:

“Becoming the nominee of the party of Abraham Lincoln … has been the greatest honor of my life,” Trump told churchgoers at Great Faith Ministries, marking his first appearance at an African-American church.

Trumps remarks include ideas to turn both neighborhoods and the country around as well as praise for the strong foundation provided to communities and families by Christian churches. Full event video here.

In my search for articles with a transcript or full quotes I found a number of negative, cynical reviews. Trumps tone probably bothered them. He was soft spoken and gracious, as one would expect in a house of God. In addition his message was positive and faith-based American red white and blue.

As would be expected, there were protesters outside the church.

Trump is scheduled to meet with black business and church leaders in Philadelphia later in the day.

This entry was posted in Education, Religion. Bookmark the permalink.