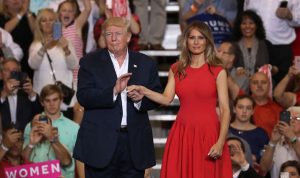 Trump held a rally in Florida on Saturday….

As expected, no matter what Trump said negative reporting would follow. Those who despise him make up their minds about what he’s communicating even before he opens his mouth…he’s just a racist xenophobe and that’s that. Likewise, his family members come under attack, despite past calls that the president’s family should be left alone. President Trump isn’t standing for fake news. Apparently Melania isn’t either. The big dog shows his teeth, while his mate seeks blessings from above. Call it a two pronged strategy to inspire higher levels of integrity in the press.

On Saturday Trump was discussing the turmoil and increased crime in European countries following the surge of refugees into nations like Germany, Sweden, and France. Trump:

Trump was bashed for “misleading the people” in his remarks about Sweden. Reporters assumed he was referring to a terror attack the night before. Why would they make this assumption? Did they even bother to get a transcript of his remarks?

The President was not talking about a terror attack and certainly not about an attack that never happened. But the assumption and speculation (fake news) would make Trump look “unqualified” to be president and perhaps that was the intent. Never fear, the President explained (Tweet) that his remarks followed a report by Ami Horowitz on Tucker Carlson’s show Friday night. Horowitz asserts that Swedish officials are in denial about the negative effects of the refugee surge, including the fact that costly efforts to integrate refugees into Swedish culture simply have not worked. See an interview with Horowitz on the Stuart Varney show here.

The Horowitz documentary can be viewed here.

President Trump should be praised for using his position to bring awareness to our people. We can learn from the experiences of others. Depending on the ultimate fate of Europe, we could become the sole refuge of freedom in the future. The warning is not about refugees per se but about radicals among the refugees who are determined to use their voices and influence to install Islamic regions in the countries they invade under the cover of refugee status. The future of our free and open society depends on awareness about this very real and very dangerous problem. While Swedish officials remain dedicated to their open borders policy, and our media continues to play an activist political game, our President is serving the people, no matter how difficult to believe the message may seem.

The very gracious Melania apparently decided to make a statement of her own on Saturday when she chose to open the event with The Lord’s Prayer. Her decision garnered immediate derision on social media with activists “mocking her accent and religion and branding her everything from a hostage to a whore – all for the secular offense of reciting “The Lord’s Prayer.” One tweeter went “dictator” postal:

Melania starts the dictatorship rally with the Lord’s Prayer? NOT EVERY AMERICAN IS CHRISTIAN!!!! Country over party.

No, it wasn’t Dewey, unless his Twitter handle is @JaimePrimak. it could be one of his comrades. Do these intolerant ungracious people understand anything about this nations history or the meaning of freedom or tolerance? Apparently not. We have space for Islamic calls to prayer everywhere including in the halls of government, schools, and businesses but the First Lady’s choice of prayer at a rally is not to be tolerated. Remarkable and remarkably ignorant!

Fortunately the citizens that support the President and First lady were enthusiastic during the rally and very supportive of the way the pair are asserting the opinions and rights of many Americans whose voices have been blunted, criticized, violently protested and ignored for far too long.

26 Responses to Bloooowback: Trump Held a Rally on Saturday