A sly democrat operative slipped into CPAC and started passing out little Russian flags with Trumps name on it to mostly college age attendees.    Then moments later they were waving the Russian flags  during Trump’s speech.

CPAC organizers quickly spotted the ruse and started collecting the flags, but not before the press has a wonderful photo op.  But, the really embarrassing part is that not one of the college kids had a clue they were waving the Russian flag! 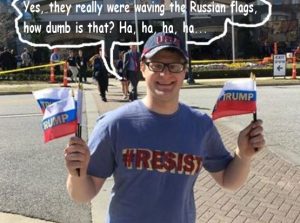 The story went out on the internet almost immediately (hmmm… that’s seems suspiciously coincidental), but it was not revealed as a hoax for hours.  But, in the end at lot of democrats had a good laugh at the expense of the humiliated republicans.

I’m sure Putin would have appreciated the gesture, if he saw it.   Heck he might have  been so pleased and so moved by it,  that he may have backed off from invading the Ukraine, who knows! lol (I’m kidding)

“What happened was these little flags they had, they were branded with “Trump” on them, and they were the Russian flag, and they were manufactured by a Democrat hate group, because that’s what the Democrat Party is. The Democrat Party, my friends, is the largest hate group in the country. Bar none. So, anyway, they pass these flags out, and they’ve got “Trump” on them. They are facsimiles or replicas of the Russian flag, and people are waving them around and so forth, and then here they come and they come confiscate them because they’re plants.

It’s a good trick, don’t misunderstand. The problem here is there’s coordination between the guy who planted the flags and the media. The media is reporting this as though these Trump people were eager to wave Russian flags, because don’t you know there’s a connection between Trump and the Russians, and everybody that voted for Trump knows if it hadn’t been for the Russians, why, Trump would have never been elected. This is the big lie.” Rush Limbaugh