The Worst Human Crisis in the World Today

“It’s the worst human crisis in the world and yet almost nobody knows about it. The widespread devastation and monstrous genocide in South Sudan is so pervasive that it could have only be done by people without any semblance of human compassion or conscience.  The self-inflicted misery is on a scale civilized minds find hard to even imagine, much less justify.”

Toronto Sun, June, 2017:  The civil war in South Sudan is arguably as bloody and catastrophic as the one in Syria. The story there is one of displacement, famine, rape and genocide.

This is true of the war in Yemen as well, where countless people face unrelenting warfare and starvation. Yemen has become Saudi Arabia’s war on innocents, to further its criminal sectarian agenda for control and influence in the region.

But even the war in Yemen cannot match the catastrophe unfolding in South Sudan, where the misery has reached depths comparable to the images we have come to associate only with Syria.

The brutality of ISIS – the public floggings and beheadings – has fixed our horrified gaze on Syria and Iraq. This conflict threatens vested political interests, as outcomes in the Middle East have high international stakes.

The United States and Russia both have eyes on the region. The world is therefore fed a daily dose of happenings in Syria while the South Sudanese languish unnoticed in their inescapable misery.

South Sudan became independent six years ago, and then only after another protracted war. But ever since, the country has been torn by violence and economic hardship. The latest trouble erupted when the president accused the vice president of leading a coup. The government is now fighting its own people. 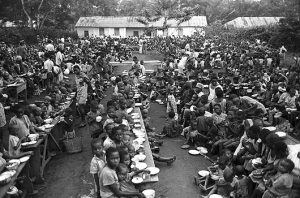 (Photo on left – Misery is nothing new to
Africa, but the exploiting of misery is and  business is booming)  Since the recent fighting began in 2016, about three and a half million people have been forced to leave their homes. Some of them have escaped to other countries, but reportedly there are close to two million people displaced within the country. These are the ones who are most at risk of dying of starvation or being attacked by their own government.

With so many people displaced from their homes, there is no functioning economy. Aid is slow to arrive, and the aid trucks that get through never reach the most desperate.

The killings in South Sudan continue. A failed UN Security Council embargo on its weapons may have curbed the fighting somewhat. The clashing parties, who often recruit young children as soldiers, continue to smuggle weapons in from neighboring countries.

John Prendergast, director of the Enough Project, said in a recent Reuters story that 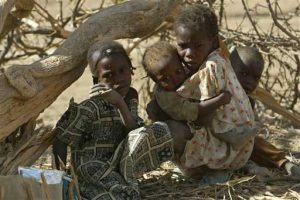 “South Sudanese civilians had a reasonable expectation that the Security Council would make good on its long-standing threat to impose an arms embargo and extend sanctions to some of the senior leaders who have been responsible for grave human rights abuses.” That has not happened.

The country is becoming a political quagmire. The nations that opposed the UNSC embargo on weapons continue to thwart any efforts toward alleviating people’s suffering. Even the countries that abstained have some economic interest in the region, especially China.

Yet another UN resolution was opposed by the same countries that blocked the embargo. They questioned the usefulness of the resolution, which would have authorized 4000troops from African nations. These would have joined 1200 UN peacekeeping troops in South Sudan.

Meanwhile, the humanitarian crisis worsens. The young country has been abandoned by world powers, and only the humanitarian agencies have provided a measure of relief to the suffering and starving millions.   (End of report)

Perhaps the worst part of this story is, what we see is not all that unusual by African standards.  Floods, famine, disease and war always seem to be of Biblical proportions over here; so much so, that it’s not even big news anymore.  Every time war or natural disasters happen, the African nations are wholly unprepared to deal with it.   Then the Western nations are asked once again to pony up their billions, send mega-tons of food and relief workers/troops fast.  But, when no amount of aide is ever enough, when no long term improvement lasts, when the corrupt oligarchs and brutal despots keep enriching themselves with our charity and the  tragedies just keep piling up… our caring is gradually being replaced with ambivalence.   Is it any wonder?

This entry was posted in Military and tagged south sudan, sudanese, war. Bookmark the permalink.

1 Response to The Worst Human Crisis in the World Today