Part 2. Lunch at Plaza Park – Where the Homeless Gather

As hoped, my next contact in the park was with Teri Dubose, the organizer for “Lunch in the Park.”

time ago, Teri began to feel a little uneasy taking her lunch breaks in Plaza Park.  This was due to a growing number of some pretty rough and dirty characters hanging out there and the absence of Chicoans and their families.

Teri told me during her lunch breaks she had observed on occasion what looked like dope transactions taking place and other times people using drugs.   The whole seedy atmosphere of transients, drugs, bad behavior, just made her feel unsafe.

This was supposed to be a public park, but the transients had taken it over as their place to loiter all day long.  This motivated Teri to do something to turn this situation around, but what could she do as just one person?   Then it came to her in a flash: Hey, don’t avoid the park – just invite some friends to join her.  The idea was to start filling up the benches and tables with local folks so the families would return. 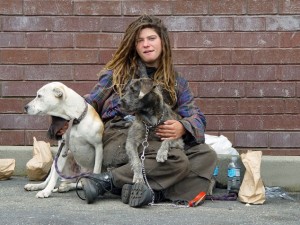 It was hoped their peaceful presence may slow down some the criminal activity that she had noticed in the recent past.  Thus began the idea of “Lunch in Plaza Park” every Wed. and Friday at 1 p.m.  It began with a few concerned citizens and their numbers have kept growing ever since.

I want to make this part very, very clear:  According to Teri and the other people I spoke with, nobody among them is looking for trouble.  They only want to have their lunch and to be a law abiding presence.  They do not want a confrontation with the transients or anyone else.   This is a 100% peaceful group and thus are not… vigilantes, nor does it look like they could morph into such a group.  They are, however, all about keeping the park open to kids, families or  anyone without having legitimate concerns over drug sales, drug use or other criminal activities.

My feeling is, the people of Chico have spent a lot of tax money to makeover Plaza Park, but since the arrival of these so-called homeless, the park improvements seem to be at risk.  Maybe it is time to support Teri and the community.  Come out for lunch do not be intimidated by these outsiders.

I was going to cut the following for the sake of brevity, but maybe you would be interested in just a little more?

Up till this time, there have been too many criminal incidents that have kept families away.  For example, there have been arrests for drunkenness, littering, and vandalism. The latter caused the restrooms to be locked early.  The immediate around the park has suffered from shoplifting, car break-ins, bike thefts, fighting, stabbings, prostitution, destruction of public property and other crimes up to and including murder.

Now, back to my interview:  Teri said, “if more people would come out and use our park, the less likely that kind of behavior would happen.”  I know she is right, but I’m also concerned for her safety.  This is not a risk free idea because the area is still full of chronic troublemakers.

Teri’s opinion was that Chico has been on the receiving end for problems that were given one-way bus tickets to Chico, or they were simply forced out of other communities for their bad behavior.   However, Teri emphasized she is not out to deny anyone the use of our services or run anyone off from Chico.  But, her group will not tolerate criminal behavior by homeless abusing those services and our community.   As responsible citizens they are trying to do what they can to help reclaim this blighted park that sits right in the heart of Chico and they could use your help!

From my own investigation I have determined that a majority of the homeless we see camping in the parks, washing  clothes in the city fountain, etc., absolutely do come from far outside this area.   How they got here is a little less certain, but I have heard from our police officers that some communities have resorted to buying one-way bus tickets for their problem people.  And some cities have gone so far as to give them one-way airline tickets to some place far away!  How do I know that?  Well,  I personally saw the end result of “shuttling” in Honolulu.   I’m pretty sure those homeless didn’t have the money for a plane ticket, so somebody paid for them to go there.   If it can happen to Hawaii, it can happen to little Chico.  That practice should be against the law!

14 Responses to Part 2. Lunch at Plaza Park – Where the Homeless Gather