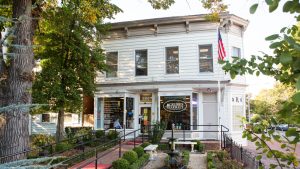 On October 6, 2017, the American Flag hangs outside of Grubb’s Pharmacy in Northeast, Washington, D.C. Grubb’s Pharmacy, established in 1867, is the oldest pharmacy in D.C., and with its convenient location to The U.S. Capitol, services many Members of Congress.

* UPDATE CLARIFICATION: Pharmacist Dr. Michael Kim issued an apology and a statement in an email to FOX News:

“The comment was made in a hypothetical joking way which was not conveyed in the article,” Kim said in an email. “I know that patient privacy and serious health conditions are no joking matter and I’m sorry that the comments gave the impression that I was actually talking about someone specific, but I was only talking in a speculative manner without anyone in mind.”

A perk for all time…a small pharmacy in Washington DC has been delivering medications to members of Congress for a couple of decades. The pharmacist turned owner decided he should share a concern of his with the rest of the public. Erin Mershon of Stat has the story:

Mike Kim, the reserved pharmacist-turned-owner of the pharmacy, said he has gotten used to knowing the most sensitive details about some of the most famous people in Washington.

“At first it’s cool, and then you realize, I’m filling some drugs that are for some pretty serious health problems as well. And these are the people that are running the country,” Kim said, listing treatments for conditions like diabetes and Alzheimer’s.

“It makes you kind of sit back and say, ‘Wow, they’re making the highest laws of the land and they might not even remember what happened yesterday.'”

I wish I could say that this revelation comes as big news but I think you and I would agree, we in California have a couple of congressional leaders that fit the bill.

Some of the people in Congress have tried to hang the Alzheimer’s label around Trump’s neck. Maybe it’s time we found out who in Congress suffers from this debilitating disease.

This entry was posted in Education. Bookmark the permalink.