The Chico Community Watch group held a meeting last night to discuss issues with the homeless. After the meeting I had an opportunity to speak with Trevor Skaggs (see photo below on left).   Trevor has been a volunteer for over a month and has been active in Bidwell Park clean-ups even prior to becoming a volunteer. 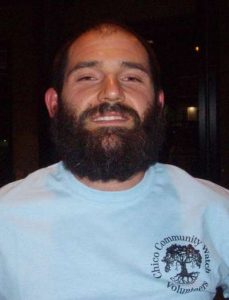 I asked him what he sees at the long term solution with the trash, vandalism and other issues associated with Chico’s growing homeless population?

I am paraphrasing his reply, and using the exact verbiage whenever possible. However, some content has been omitted for the sheer sake of space and ease of readability:

Trevor: Ultimately our community has a responsibility for our community. That’s why we have volunteers that care, because local government can only do so much. We are part of this community, so it becomes our responsibility. You know, you have to be the change that you want to see in the world.

So, groups like this and individuals that advocate for going out there and picking up the trash and advocated for making our community stronger, those are the ultimate solutions, I feel.   Getting real people out in the community to do real things is ultimately what the solution is.”

Me: It was brought up that building tiny houses or some sort of low cost housing project might be a solution for the homeless, do you have an opinion on that?

Trevor Yeah, I have, I’ve reviewed quite a bit of solutions that have worked elsewhere.  The housing first model, the one that has been used in some fairly large cities, Salt Lake City is the best example.

The local government gave a piece a property to a homeless advocacy organization and they put up a bunch of very tiny houses, one room, a light and a power outlet with an address. They were given a physical address that wasn’t a communal address, they had their own address. Which really opens up a lot of doors, a bank account, being able to apply for a job…the structure on which our society is built on is you need to have a location because on the outside that will establish you as a citizen of the community.

So, it’s a pretty good solution, they’ve had really good effect. It’s not going to be a total solution to homelessness, but its going to be a group solution for the people who want it to work for them.

Me: Do you have a dollar cost figure per individual to do this?

Trevor: I think it’s going to be highly regionally dependent. I know Salt Lake City did it, I want to say for each unit was roughly $1400. The rent for the land was essentially free for them…. So as building it itself and part of the ongoing maintenance in SLC, and other cities, you pay an ongoing rent, very manageable, $150 to $200 a month and you also have to donate 4 hours a month of your time to keep the house up, gardening, mowing the lawn and picking up the trash. So a lot of the maintenance can be deferred to the community to make it self-sufficient in that way.”

Me:  What is going to stop people coming in asking for the very same service you just built for the last group of people? We can’t put a moat around Butte County.  Is there some sort of quota that we should be responsible for and how much does the community really owe to the people coming here from other states looking for our services?

A community is based on the model that we all have respect for each other. It’s not necessarily a fairness model, which is kind of a strange thing to say in our current day and age, but it’s about equality between individuals, not equality as a whole. And so realistically what we want to do is to incentivize people to become members of our society in the way the rest of us expect a society to be. .. the housing first model is a nice building block for the individual that wants to play by the rules. ” End

It should be noted that the previous day volunteers used their own vehicles and trailers to search the city for abandoned shopping carts. They collected 25 carts belonging to various stores. Shopping carts cost local businesses about $300 each. That would $7500 in recovered shopping carts. In addition they also located a large pile of bicycle parts. All of this property was turned over the city corporation yard for return to its owners.

The mission statement: Chico Community Watch is a citizen volunteer group dedicated to protecting the quality of life in the city of Chico and the surrounding area. Made up of street, neighborhood, project area, and project issue groups, we focus on issues negatively affecting our community. With a boots on the ground attitude, we take action to solve these negative issues in a peaceful and respectful way.

This entry was posted in Uncategorized and tagged Chico Community Watch. Bookmark the permalink.

2 Responses to Chico Community Watch (An Interview with Trevor Skaggs)