Starting out on a positive note, this vagrancy/homeless problem is not impossible to solve, it’s not going to be easy, but it’s certainly not impossible.  Remember that this problem  was not here 20 years ago.   But, over time, both in our local community and in this state, people in positions of authority have done well intended things, costly things, that  contributed greatly to this problem.

So, if we can create the problem, we can also solve the problem.   However, I must caution you that undoing the mistakes of the past will not be easy nor can they be fixed by… repeating them. Hold that thought as you read on.

At our library you can read the old newspaper accounts that tell the story of what gradually happened in Chico, to the State of Ca. and the entire West Coast.  The latter are stories that 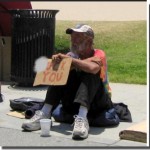 center around far left politics, but it’s related to little Chico.   For our purposes lets just focus locally, otherwise I would be writing a book!

It began with the Jesus Center. That was from the very beginning a nuisance to merchants in the immediate area. A research of old newspaper reports tell of chronic vandalism, frequent dumping of trash on business property, urinating and feces in doorways and the thefts.

When the proposed expansion of the Jesus Center was proposed, it was met with opposition by some of the business located nearby.  But their concerns were overshadowed by those who felt we had a duty to provide more beds and expand the center.   They held the emotional argument as champions of the poor.   The other side, those opposing expansion were quickly labeled as mean, heartless curmudgeons that lacked empathy or compassion.  The pro-side were of course the good people, who just wanted to do the right thing.

As you might expect, the homeless shelter expansion went forward and so did the problems associated with the increased homeless population, just as had been predicted!  And I might add, they continue to grow to this day.  So, this is where our local problem  started -  one well known shelter for those on the road.  Thus, “Build it and they will come” became the new slogan for the concerned businesses and property owners and it was not understated or without just cause for concern. Now the problem is reaching deep into Chico and it’s not just those located near the shelters that experience the problems brought here by the new wave of vagrants.

The years passed and now enters the movement for the new  Tiny Houses!   Tiny houses for the homeless is another form of the homeless evolution that began decades back with the Jesus Center expansion and then the other shelters that followed. It’s also part of much grander political problem that has Californians fleeing the state.

Oddly, the newer Torres shelter (near COSTCO) still operates at less than capacity? The Torres Shelter has rules and rules are not always appreciated by the new wave of transients. Disruptive people get kicked out and you can’t bring in booze or drugs!

Once again, the advocates for the homeless rise to meet this challenge. They tell us that we need a new “wet” shelter because the Torres shelter isn’t for everyone. What’s a wet shelter, you may wonder? This is basically a shelter with few rules, come in drunk or high, come in late, you still get a bed. The group that wants a wet shelter now supports the Tiny Houses concept.

There’s a lot more to this problem, obviously. And let me say, there is some merit to both sides which makes it even more confusing. I fully acknowledge this, because that part has led to warring sides, rather than a community united in solving a serious problem.

Currently I see how politics is being injected and how facts are being abused.    Soon we have so much disinformation flying around that the typical voter will just give up to the whims of the hardcore, passionate advocates!   That’s how CA was lost and why we continue to sink into poverty, burdened by high taxes, incompetence and corruption.  Dare I say it,  California has become a disaster of mismanagement under the Democrats?

This entry was posted in Uncategorized and tagged Chico, homeless, tiny houses. Bookmark the permalink.

4 Responses to Tiny Houses and Chico